Richard Jewell is a movie to see, but... 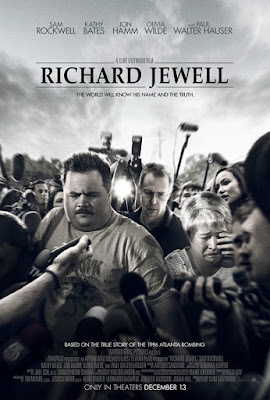 The new film directed by Clint Eastwood, “Richard Jewell,” is a story he wanted to tell for years, he said.

Jewell was the security guard who spotted a suspicious bag at an outdoor concert during the 1996 summer Olympics in Atlanta. He rallied police and when the bomb squad examined the backpack they founded it contained explosives.

Before Jewell and others could clear the area, the bomb went off killing one, injuring more than 100. A second person died of a heart attack. Had Jewell not seen the unattended backpack, the bomb could have killed many more.


Richard Jewell was a national hero for a brief time until tips to the media made him the suspect in the bombing. His life was turned inside out for months until he was cleared.

Paul Walter Hauser gives what may be the best performance of the year as Jewell. Also excellent were Sam Rockwell as his lawyer, Kathy Bates as his mother, Jon Hamm as an FBI investigator and Olivia Wilde as a reporter from the Atlanta Journal-Constitution who broke the suspicion story.

But the Atlanta paper objects to the way it and its reporter are portrayed and its lawyers sent a letter of complaint to Warner Bros. asking the studio to put a disclaimer on the movie. (Read more about it here.)
Posted by Elgin Bleecker at 10:55 PM