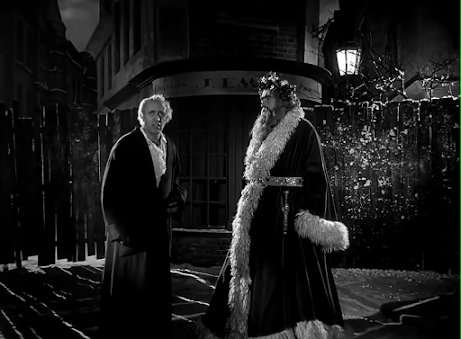 This week, I am looking forward to watching – for the umpteenth time – the 1951 version of “A Christmas Carol.” It is the one starring Alistair Sim as Scrooge and the one I consider the best of the bunch.

Sim looks like he is having the time of his life playing the old skinflint. Director Brian Desmond Hurst keeps the actor on course and the sentimentality under control, especially in the Tiny Tim scenes and the flashbacks of the young Ebenezer. He also keeps the action clipping right along as he shoves Scrooge into some wonderfully nightmarish sequences.

The fright and anxiety of Scrooge, the high contrast black and white photography and the moody sets, place Charles Dickens’ 1843 novella in the world of film noir.

Here’s wishing you a Merry Christmas and a Happy Holiday Season. Hope you will visit this page again in the New Year.