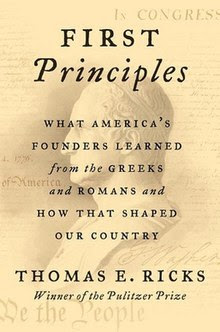 Here is something different for today, away from the mean streets of mystery and crime.

It is Presidents’ Day, which seemed like a good day for a few words about my favorite book of 2021: First Principles: What America’s Founders Learned From the Greeks and Romans and How That Shaped Our Country by Thomas E. Ricks.

Ricks, a career journalist now retired from the Washington Post, was interested in learning just how America’s founding fathers figured out how to create a democratic government and what a republic would look like. He knew the stories of the men and the battles they had with each other in hammering out the rules that would guide the new country. But how did those men know where to look for guidance?

To find out, Ricks selected four of the founders to concentrate on: George Washington, Thomas Jefferson, John Adams and James Madison. He looked into their backgrounds, focusing on their education, where they went to school, the subjects they studied, and what those schools were like in the 18th century. Ricks even found and profiled some of their instructors.

Higher education in those days meant reading the classics. Even Washington, who did not have as extensive a formal education as the other three, was familiar enough with the classics for Ricks to trace the general’s tactics in fighting the British to passages from ancient Rome.

First Principles is a fascinating book, and unlike a lot of histories, it is written in a sharp, accessible style, something that could be expected from a man who spent his life writing about complex issues for newspaper readers.

As a final thought, it may not be remembered, but not so long ago, our politicians could refer to the classics. In a 1968 speech, Robert F. Kennedy reflecting on the death and destruction of the war in Vietnam, said:

“I am concerned that at the end of it all ... they may say, as Tacitus said of Rome, ‘They made a desert, and called it peace.’”