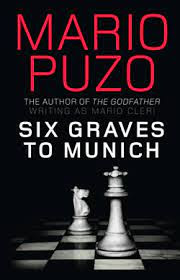 In 1969, author Mario Puzo hit the jackpot with his blockbuster novel, The Godfather, about the fictional Corleone crime family.

For many years before that, he made a living writing stories for men’s magazines. Then in 1967 he published the novel, Six Graves to Munich, under the pen name Mario Cleri.

Six Graves to Munich is a short (224-page), fast-paced thriller set in Europe during the Cold War era. It is tale of vengeance, full of sex and violence.

During World War II, Michael Rogan, was a U.S. intelligence officer married to a French woman. He and his wife were captured by the Nazi’s and tortured. His wife died.

Ten years later, after a long recovery, Rogan returns to Europe to find the men responsible – and kill them.

One of the torturers Rogan hunts was Italian army officer. He tracks the man down to Palermo, and learns he is a high ranking mafioso and well protected.

In this section of the book, Puzo’s knowledge of the underworld is evident. It reads like a test run for the sections of his next book in which Michael Corleone hides out in the hills of Sicily. But, in keeping with Puzo’s men’s mag background, Rogan, while on the trail of the man he wants to kill, takes time out for a steamy romp with a beautiful young Italian woman.

Today, with 20-20 hindsight, Six Graves to Munich, with its suspense and period detail, might be taken as Puzo’s warm up for his big novel.