“The Killers” from 1946 is an acknowledged film-noir classic. In fact, if it is not No. 1 on the list, it is surely in the top five. 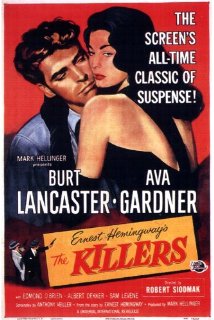 It has all the elements of the genre: crime, conflicts, betrayals, violence, plot twists, boxing, a heist, a femme fatale, and a tough, cynical detective. It also has all the techniques: flashbacks, voice-over narration (bridging the flashbacks), deep shadows, beautiful, expressionistic black and white photography, claustrophobic sets (some with ceilings).

One of the masters of film noir was at the helm. Director Robert Siodmak came up in the German cinema of the 1920s and 30s, then fled the Nazis, landed in Hollywood and directed many films including the noir classics, “Criss Cross” and “Phantom Lady.”

The film also has star-making parts for Burt Lancaster and Ava Gardner, an excellent role for Edmond O’Brien, and a great supporting cast: Albert Dekker, Same Levene, and Jeff Corey as a hoodlum junkie. (Drug abuse in a 1940s movie? How did that get by the Hollywood censors?)

But what “The Killers” does not have – and here I am going anger all the loyal fans of this movie – is a good opening.

Two button men show up in a small town looking for a man they have been hired to kill. They cannot find the guy, so they go into a diner, order dinner, bully the counter man, the cook and a teenager, and tell the locals exactly what they plan to do. People love this opening which is lifted directly from an Ernest Hemingway short story. They praise the tough, clipped dialog and the menace. 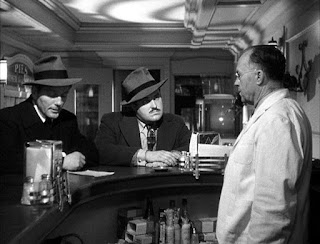 The story by Hemingway has two highly unprofessional professional killers. Would a couple of hitmen walk around town, talk to the locals, tell all what they are going to do, and allow everyone to get a good look at them?

Hemingway needed Martin Scorsese to straighten him out. Even the attempt at humor, when the bad guys order fancy dinners, falls flat.

That a scene like that was allowed to stand is surprising, seeing as Mark Hellinger produced the picture. Hellinger was a long-time newspaperman who became a famous New York columnist in the 1930s before going to Hollywood. He should have known better. But, then again, he and Universal bought the rights to a short story by the very famous Hemingway and used the story and the name to promote the movie. 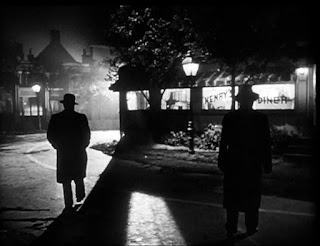 The reasons the opening does not kill "The Killers," are that it is played to the hilt by two great character actors: William Conrad and Charles McGraw. And director Siodmak takes his time setting a tone of danger and anxiety. Photographer Woody Bredell presents the most noirish of noir settings, making placid, middle America look dark and creepy because evil has come to town. Composer Miklos Rozsa pulls it all together with his hyper, chaotic music, underscored with the hitmen’s pounding theme, which is unforgettable.

The following 90 minutes of “The Killers” is terrific and was created by screenwriter Anthony Veiller, and, according to the IMDb site, by John Huston and Richard Brooks, who are uncredited.

Is "The Killers" a great film? You bet it is. So, don’t let my criticism keep you away.