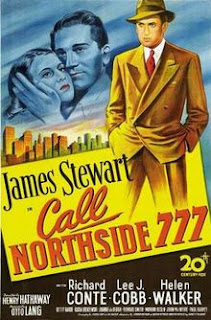 “Call Northside 777” from 1948 was one of the early docu-noir crime films made after World War 2 and filmed on location, something new for Hollywood at that time. It was directed by Henry Hathaway, who was no stranger to working on location having made many westerns, and who had also done several docu-noirs including: “The House on 92nd Street,” “13 Rue Madeleine,” and “Kiss of Death.”

In “Call Northside 777,” James Stewart plays a reporter on a Chicago newspaper who responds to an unusual classified ad offering $5,000 to anyone with information about the killing of a police officer a decade earlier. Stewart’s reporter discovers that a scrub woman named Tillie Wiecek, played by a wonderful actress named Kasia Orzazewski, placed the ad in an attempt to gather new evidence to free her son, Frank.

Frank Wiecek, played by Richard Conte, who turns in a strong, sympathetic performance, is serving a life sentence for the murder. The reporter is skeptical at first, but as he digs into the facts of the case and uncovers lying witnesses and possible police corruption, he changes his mind and goes full out to prove Frank’s innocence. 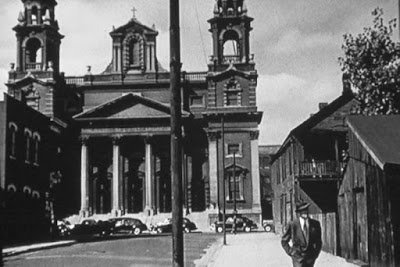 “Call Northside 777,” which was based on a true story, was mostly filmed on location in Chicago, capturing scenes on city streets that have either changed beyond recognition or no longer exist. 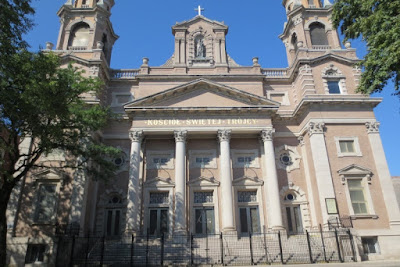 On a recent trip to Chicago, my destination in the Near North Side was close to one of the locations in “Call Northside 777.” 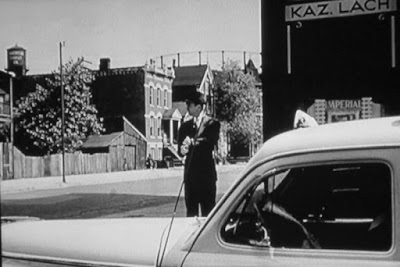 The Holy Trinity Church, on Noble Street, near the intersection of Milwaukee Avenue and Division Street, stood at the head of the street on which Tillie Wiecek lived in the film. 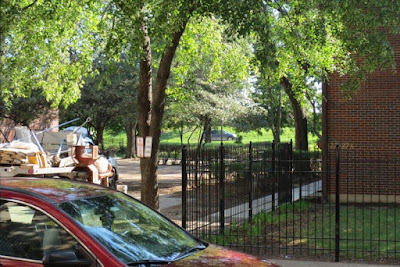 Today, Tillie’s street is gone as are the old houses that ran east toward what looked like a gas tank. New brick apartments were built across from the church replacing the houses and the shop on the corner where Jimmy Stewart caught a taxi cab. The street was removed and a pedestrian square is now in its place along with many new trees.

Where Tillie’s house was located in the movie is now a ramp to the Kennedy Expressway. The church is still there and appears well kept with its original Polish name written above the pillars: KOSCIOL SWIETEJ TROJCY. 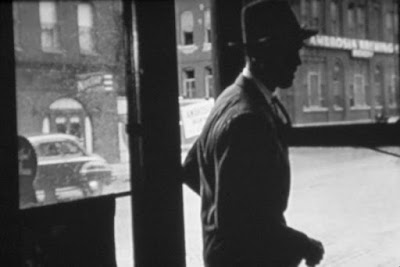 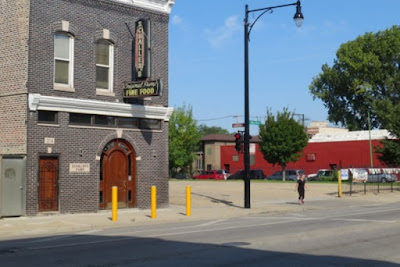 In a quiet neighborhood just west of the stadium where the Chicago White Sox play baseball, is another location used in the film. When Stewart’s character searches for an elusive witness, he enters a corner bar which appears to be at the corner of Halstead Avenue and 37th Street.

In the film, a bar across the street with a beer sign that says Nectar can be seen out the window. It had a rounded brick entry and looks like one of Chicago’s oldest taverns, Schaller’s Pump. Next to the bar was a brewery which had many names over the years, but at that time was called Ambrosia. Today, the brewery building is gone, but Schaller’s remains. The corner tavern Stewart went into is now an office.

(For more on the locations used for this film, see the Forgotten Chicago Forum where people have done a lot of research.)

A glimpse at Chicago’s immigrant neighborhoods of the past is an added bonus for today’s viewers of the film. Another plus on the DVD is the commentary track by Alain Silver and James Ursini, the authors of several books on film noir. But the main attraction of “Call Northside 777” is the film itself, which, despite some pretty old technology – from the reporter’s manual typewriter to an early lie detector test – still holds up as a solid detective story.