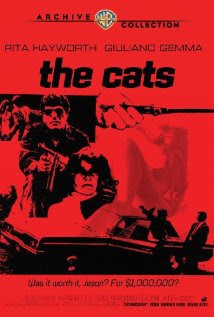 Italian crime films of the 1960s and 1970s are a guilty pleasure of mine. They were generally cheap, fast and violent, often oddly plotted and at times incoherent. Euro Crime or “poliziotteschi” films, as they are sometimes called, were a hot genre that Italian producers got into when Spaghetti Westerns cooled down.

“The Bastard” from 1968, is either an early example of this genre, or a modernized reworking of the Spaghetti Western. Set in the American southwest, it is the story of two criminal brothers, played by Giuliano Gemma and Klaus Kinski, their boozy mother, played by Rita Hayworth (yes, that Rita Hayworth), and an attractive femme fatale, Margaret Lee, and a good girl played by former Miss France and Bond girl Claudine Auger.

Gemma’s character robs a jewelry store, makes off with a bag of gems, guns down half a dozen rival bad guys who want the loot, and is then ripped off, maimed, and left to die in the desert by his own brother. He is found and nursed back to health by ranch owner Auger. To show his appreciation to her, he steals $200 and her car and goes after his brother for revenge. Before he can reach Kinski, an earthquake strikes and the film ends with bloodshed in the rubble.

Writer-Director Duccio Tessari keeps the whole thing moving at a rapid pace. But, most of the actors either overplay their parts or shuffle through scenes like zombies. The usually energetic Kinski, is cool and restrained. Rita Hayworth, on the other hand, chews up the scenery. Gemma, who got his big break in movies from Tessari and who made several films with the director, including, “A Pistol for Ringo,” (a Spaghetti Western liked by Quentin Tarantino), does a pretty good job making his way through this movie which seems to have been written on a series of cocktail napkins, some of which got lost.

Fans of poliziotteschi films will like “The Bastard,” choppy editing, poor dubbing and all. Others may find it interesting that this film was at the beginning of the transition from Italian-made westerns to crime films. Shot in New Mexico, the bad guys zoom around the hot rocky desert in big, wide American cars rather than speeding through the streets of Rome, Naples or Milan in tiny Italian cars.

“The Bastard” (the original title was “I bastardi,” and for an obscure reason the video is called “The Cats") may not be for everyone, but those who like Italian genre films might enjoy this movie. I know I did.