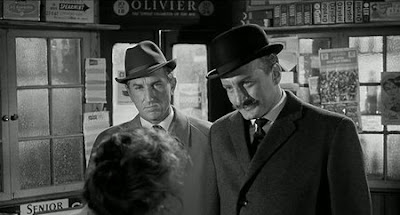 This review goes out with thanks to Yvette who mentioned “The List of Adrian Messenger” in a post last week on her excellent site, In So Many Words. I commented that I saw the film long ago and did not remember much about it except the disguises and deceptions.

In thinking about the 1963 film, I realized I had not seen it since watching it on TV as a kid with my family in the living room of our old house.

A quick search turned up a very good video of the entire movie on YouTube. If anyone has not seen “The List of Adrian Messenger,” please take a look. If anyone has seen it and wants to view it again, move fast. Films like this are often taken down as quickly as they appear.

“The List of Adrian Messenger” is a John Huston film based on a Philip MacDonald novel and starring George C. Scott.

Scott is terrific, as usual, this time playing a retired British intelligence officer who is asked by a friend, Adrian Messenger, to check into the whereabouts of a group of men. The friend does not say much more about his list of names and soon cannot say another word as he is murdered by someone who is killing off everyone on the list.

The killer is seen from the beginning of the picture, but only in the disguises he uses. His identity and his reasons for knocking off these men is the mystery Scott’s character sets out to discover.

To say any more about the intricate plot would ruin the fun for anyone who has not seen the movie.

For George C. Scott, this film was his first starring role. His previous film roles were in supporting parts in “Anatomy of a Murder” and “The Hustler.” He had also appeared in many TV dramas. With this film, Scott got a chance to show he had the chops to carry a major movie. And carry it, he does. Scott dominates every scene he is in with his personal power and that fast, sharp, distinctive speech pattern and gravelly voice. He also brings an intensity and danger to this highly polished film.

In the opening credits, names of some of the biggest movie stars of the time float across the screen, but these actors are not seen in the film. Or are they? Huston, in keeping with the theme of disguises, disguised Tony Curtis, Robert Mitchum, Frank Sinatra, and Burt Lancaster so well, that only in the final moments of the movie does he reveal which parts they played. Well, at least three will be revealed. One will be quite obvious.

“The List of Adrian Messenger” is a highly enjoyable feature.

Finally, when the video started I recognized the cool, intriguing theme music by Jerry Goldsmith. As it turns out, I remembered more of this movie than I thought. So, I suppose everything we see and hear is stored away somewhere. And if we cannot immediately access it, there is always YouTube.