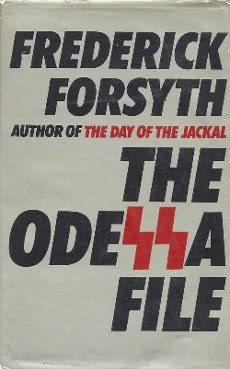 The Odessa File is a 1972 thriller by Frederick Forsyth about a young German tracking down a notorious Nazi war criminal.

Peter Miller, 29, a freelance reporter for West German glossy magazines in 1963, comes across the diary of a holocaust survivor who chronicled the atrocities committed in a concentration camp. The more Miller reads the more angered he becomes and the more determined he grows to find the commander of the camp, assuming he is still alive and living under an assumed name in post-war Germany.

Miller sees finding the Nazi and bringing him to justice as a terrific story, but is unable to convince his publisher. The publisher is not alone, no one wants to help Miller, including government officials charged with finding war criminals.

Undeterred, Miller presses on, more determined than ever to find the camp commander. His efforts come to the attention of a tough Jewish group with the same goals. They help Miller and warn him of the danger involved.

As Miller digs, he has no idea he has a tiger by the tail. The man he is looking for is not only alive, but also a high-ranking member of ODESSA, a secret organization of former Nazi SS men operating in Germany as well as South America and the Middle East, where they are helping the Egyptians develop rockets to bomb Israel.

The spy services of Israel are aware of the ODESSA and its plans and Miller’s work worries them and forces them to send an agent to find out what this young German is up to.

Forsyth, who also wrote The Day of the Jackal, here crafts a suspenseful tale with several parallel tracks shadowing Miller’s quest. He also weaves in a good deal of background on the SS, the pre- and post-war Germany, and the current events of 1963. He builds his story carefully until about two-thirds of way through when he tosses in a great twist. From there, the book zooms off faster than Miller’s sports car on the Autobahn.

Posted by Elgin Bleecker at 12:42 AM
Labels: Frederick Forsyth, The Odessa File