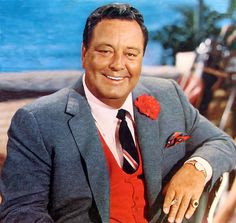 The clip, according to Newsday, a Long Island, New York newspaper, is from Gleason’s show Saturday night, Jan. 14, 1967, when he closed by reminding viewers to tune in the next day for the first Super Bowl. Newsday said the clip also proves the big football game was called “The Super Bowl,” from the start.

For me, it was a treat to see “The Great One” again. My folks watched "The Jackie Gleason Show" every week and I have some fond memories of it.

Comedian Jackie Gleason was one of the biggest stars of American television in the 1950s and 1960s. He also did some fine dramatic work in movies like “The Hustler” with Paul Newman, and “Requiem for a Heavyweight” with Anthony Quinn.
Posted by Elgin Bleecker at 2:46 PM
Labels: CBS, Jackie Gleason, Super Bowl