FFB: In the Heat of the Night by John Ball 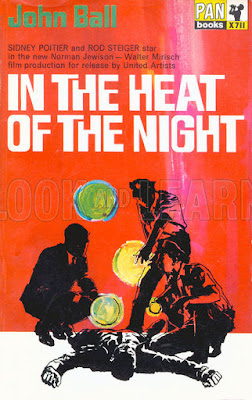 John Ball’s 1965 Edgar Award winning In the Heat of the Night is a book I owned but never read because I knew the 1967 film so well. I thought it would be impossible to separate the actors in the movie from the characters in the book. As it turned out, Ball’s depiction of Police Chief Bill Gillespie of a small, southern town, and Detective Virgil Tibbs from a big city were physically and at times temperamentally different enough to create new mental images of the two men.

In the book, Gillespie and Tibbs are thrown together when Tibbs, while waiting for a train in the middle of the night is picked up on suspicion of murder. The police, including Chief Gillespie, who are white, treat Tibbs, who is black, in the gruff, demeaning manner that was all too common in the south in those days.

When the cops learn that Tibbs is a police officer from Pasadena, California, and that he is a homicide detective, their insular little word is shaken. Most of the staff and many in the town cannot believe that a black man could be a police officer anywhere in America. To further upset them, the wealthiest man in town, Endicott, who moved there from the North, insists that Chief Gillespie contact Pasadena and request Tibbs be loaned to Gillespie’s department to solve the murder case.

The murdered man was an orchestra conductor Endicott invited to organize a summer music festival. The mayor and council agreed to the plan and hoped it would attract tourists and boost the town’s economy.

In the Heat of the Night is not only a good murder mystery, it is also a slice of American history frozen in time. The treatment of Tibbs is especially well drawn by Ball. Only Endicott calls him, Mr. Tibbs. Everyone else calls him Virgil, out of habit and to show they consider him an inferior person. Tibbs, they soon learn, has more education, more police training, more experience and more character than almost anyone else in the town.

The book has three main characters: Virgil Tibbs, Chief Gillespie, and Officer Sam Wood, the cop who discovered the body of the murdered man. Ball presents most of his story through the eyes and thoughts of Gillespie and Wood. These two police men are similar: both are tall and powerful; both are young, 32 and 29; and both are southern. During the course of the novel, they are the characters who change the most. Gillespie and Wood work closely with Tibbs, get to know him, and come to respect him. Scenes involving Tibbs without Gillespie or Wood, remain objective and Virgil Tibbs' thoughts are never revealed other than through observations of his behavior.

Ball, the author of more than 30 novels, went on to write seven more Virgil Tibbs books.

Fifty years after its publication, In the Heat of the Night is still relevant and still packs a punch.

Posted by Elgin Bleecker at 11:09 PM
Labels: Chief Gillespie, In the Heat of the Night, John Ball, Virgil Tibbs