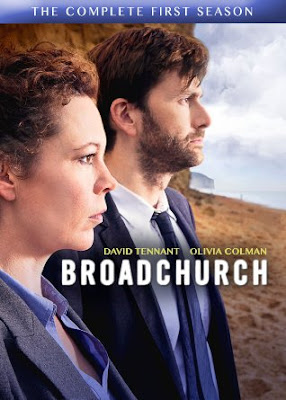 In a string of comments last week about the mini-series, “The Night Manager,” and its excellent cast, Col, of Col’s Criminal Library, recommended another crime series called “Broadchurch,” which also stars Olivia Colman.

Until this spring, this actress was unknown to me. Until last Friday, this excellent show was unknown to me. (Somehow, I missed the promotional push it got in 2013 when it aired on BBC America.) But, if Col was recommending this 8-episode series, then I was going to watch it. And watch it, I did. In fact, my wife and I binged on it for two days. We just had to find out whodunit.

In episode 1, the fictional seaside village of Broadchurch is rocked by the murder of a local, 11-year-old boy. Suddenly, in a town where everyone knows just about everyone else, people start eying other residents with suspicion.

At the regional police department, a newcomer to town, Detective Inspector Alec Hardy, played by David Tennant, is assigned to the case. Also on the case is long-time resident, Detective Sergeant Ellie Miller, played by Olivia Colman. Miller, who was hoping to get the DI’s job, is not only disappointed at losing out, but also at having to work with her cold and quirky new boss. Miller, the mother of an 11-year-old boy, also struggles to detach herself emotionally from the case which involves questioning people she has known for years.

To say any more about “Broadchurch” risks spoiling the twists and turns and surprises in this series.

Olivia Colman, who many have the most expressive face on any screen, does a fine job as a woman caught between the job and the town. Tennant also does a good job as the gruff, difficult, and troubled lead detective.

This well written show was created and co-produced by Chris Chibnall, a veteran of British television who wrote for “Doctor Who,” “Law and Order: UK,” and many other shows. He not only creates a compelling mystery, but also populates the show with realistic characters, including the grieving family of the murdered boy.

Another highlight of the show is its location. It was filmed on the southern coast of England, in an area called Dorset where the cliffs are so spectacular I though they may have been created by computer imaging.

“Broadchurch” is an example of just how good television can be.