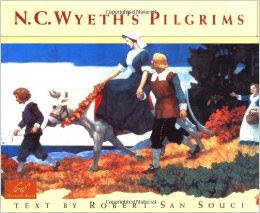 Around the turn of the millennium, I found a glossy, soft-cover book about the story of the Pilgrims and the first Thanksgiving on sale at a local bookstore, and bought it as a way to teach the story at home.

N.C. Wyeth’s Pilgrims is an over-sized book of artwork illustrating the story of that famous group who left England in 1620 and sailed for two months to the New World on the ship Mayflower. Their destination was the Virginia Colony, but they landed about 600 miles north in what is now the state of Massachusetts.

There, they established the Plymouth Colony, endured a harsh and deadly winter, and befriended the natives who introduced them to local crops. They planted, tended and harvested the food, and in the fall, had a three-day feast for the survivors of the colony and for their Native American friends.

The paintings in the book are reproductions of murals created by N.C. Wyeth (1882-1945), depicting scenes in a colorful and romantic style. The story was written by Robert San Souci.

Wyeth, an accomplished artist, had studied at the studio of artist and illustrator Howard Pyle. Later, Wyeth created illustrations for popular editions of Treasure Island and Robin Hood.

In 1940, the Metropolitan Life Insurance Company (today known simply as MetLife) commissioned Wyeth to create the series of murals for its New York City headquarters.

Wyeth worked on the project until his death in a car accident. His son, Andrew completed the project. Andrew’s son, James, is also a well-known artist.