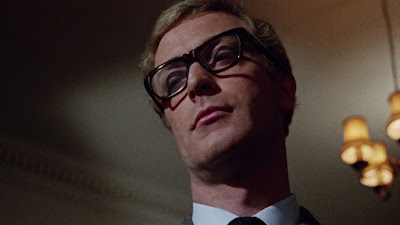 Love them, hate them, or never read them, I think most people would agree that the movies made from Len Deighton’s three spy novels, The Ipcress File, Funeral in Berlin, and Billion Dollar Brain, are pretty darn entertaining.

Again, the producer and his people pulled off a casting coup landing young, rising-star Michael Caine to play the spy they named Harry Palmer. In the Deighton books, this character has no name. Caine brought his considerable acting talent and personal charm to the role, which burst through despite a rather restrained, at first, portrayal of the somewhat bland, but deep down rebellious character. Even the heavy, black-rimmed eye glasses he wore in all three pictures could not flatten out his personality.

“The Ipcress File,” the first of the trio, is the story of the British military intelligence service setting out to find a kidnapped scientist. Harry Palmer, who had a crooked reputation while in the regular army, is reassigned to the service where, his stuffy superiors believe, his talents could be better used. The picture was directed by Sidney J. Furie, a Canadian, who gave this film a realistic, cold and claustrophobic atmosphere. Furie was greatly aided by Otto Heller’s photography. Together they employed odd framings and cocked camera angles to keep Harry Palmer, and the audience, off balance and on edge.

In the second film,“Funeral in Berlin” from 1966, Harry Palmer is sent to West Berlin and ordered to cross into Communist controlled East Berlin through Check Point Charlie, to meet a Communist colonel who wants to defect but needs help getting out. Directed by Guy Hamilton, who directed “Goldfinger" in 1964, “Funeral in Berlin” is a smoother production than "Ipcress," but still has a bit of grit and some very good location photography, again by Otto Heller. It also has a wonderful performance by Oscar Homolka as the jovial colonel. Over all, this movie has a lighter feeling than the first.

The last of the three, “Billion Dollar Brain,” from 1967, is the loopiest and slickest of the series. Here, Harry Palmer goes to frozen Finland in the middle of winter to deliver a mysterious package, discover what the package contains (deadly viruses), who wants them (Karl Malden as a slippery middle man), and the ultimate plot of a crazy Texas millionaire out to destroy Communism with the aid of a self-financed army and a computer, the billion-dollar brain of the title. Not much of this one makes sense, but the film is so lavishly produced and so artistically directed by Ken Russell, that the plot did not matter as much as the wild visual ride. “Billion Dollar Brain” is the closest to what the Bond franchise became with beautiful location photography by Billy Williams and a beautiful leading lady in Francoise Dorleac (Catherine Deneuve’s late sister). Oscar Homolka also returns in this one.

The three films showed back-to-back on cable last weekend and gave me the chance to watch “Funeral in Berlin,” which I had never seen before, and which is now my favorite of the three.

I had seen “The Ipcress File” several times, including earlier this year. “Billion Dollar Brain” I had not seen since I was a kid, watching it on TV, and unable to make head or tail of the story. But there was one sequence in it that stuck with me all those years.

When Harry Palmer is given the mysterious package to deliver, his instructions include the warning not to try to open what looks like a coffee thermos. Harry takes it to a London shopping area, enters a shoe store where they have some kind of X-ray device for customers to look down through a viewfinder at their shoes and see the bones in their feet. Harry sticks the thermos in there and has a look. It is still my favorite scene in this oddly funny movie.