FFB: A Delivery of Furies by Victor Canning 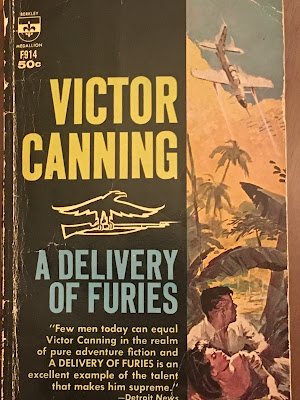 The adventure novels of Victor Canning are the kinds of books I grew up reading. But I don’t remember ever cracking open one of Canning’s books.

Then, while out of town, I found a 1964 Berkley Medallion paperback of Canning’s 1961 novel A Delivery of Furies in a used bookstore, for a price no one could resist – 25 cents.

A Delivery of Furies is the story of former Royal Air Force pilot Keith Marchant now living in South America and making money by taking on risky assignments from Barrau, a shady middleman. Sometimes the jobs reap big profits, sometimes things go bust, as happens at the beginning of the book when Marchant straggles home to his lodgings in a hotel with nothing – nothing except his life.

Marchant wants to quit this life, buy a friend’s small hotel on a Caribbean island, and live out his days in tropical ease with his girlfriend Drea. But to do that, he needs money. One big score would do it.

Barrau has one for him: Hijack a ship transporting fighter planes – the Furies of the title – and deliver the airplanes to a rebel group fighting for control of an island country. The rebels will pay him cash on delivery.

What could go wrong?

Plenty. Although some of the plot twists were pretty obvious. It is amazing the experienced Marchant could not foresee them. But Canning’s brisk writing speeds past those holes and plunges Marchant into more trouble. Along with first-person narrator Marchant, two other characters, Monk, a middle-aged former soldier who goes along on the job as Marchant’s right-hand man, and Parkes, a gruff engineer sent along by the aircraft company to supervise the assembly of the planes, are well drawn.

Canning’s writing style and his ability to keep the action moving is enjoyable, making A Delivery of Furies a fast, fun read.

(For more posts on books, check out Patti Abbott’s blog.)

Posted by Elgin Bleecker at 10:20 PM
Labels: A Delivery of Furies, Victor Canning