FFB: They Shoot Horses, Don't They? by Horace McCoy 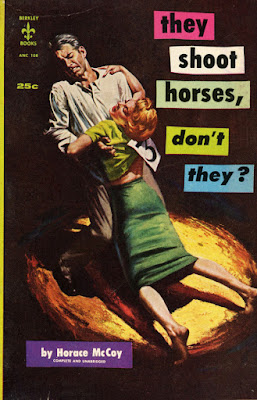 Robert shoots and kills a girl, and that is not a spoiler, he tells us this on the first page. While listening to the judge sentence him, he thinks back on how he got involved with her.

He and Gloria, after failing to find a day’s work as extras at Paramount Pictures in Hollywood, meet on the sidewalk, talk and quickly decide to enter a dance marathon in the hopes of winning the $1,000 prize and being discovered by influential movie people who might be in the audience.

Dozens of other couples have the same dream and will put themselves through grueling hours, days and weeks of dancing round the clock, with ten minute breaks to eat and sleep before being summoned back to the floor.

McCoy, who had many jobs including soldier, reporter and actor, landed in Los Angeles in the early 1930s, pursuing an acting career. Acting did not pan out, but he continued to write novels, short stories and many screenplays until his death in 1955. Several sources say he also worked as a bouncer at a dance marathon. Whether he did or not, he knew his subject and described the marathon in detail with well-drawn characters, from the shady people running the event, to the desperate people competing in it, to the crowds attending it to see the worn out couples collapsing from exhaustion.

Robert and Gloria have dreams of breaking into the movies and making it big in Hollywood, but while Robert’s dream is still alive, Gloria’s is crushed and fading fast.

They Shoot Horses, Don’t They? could be about Hollywood and how it treats the young hopefuls. Or, the dance marathon could represent the country during the Great Depression, with people willing to do anything to keep living. Most of the dancers are thankful just to have a place to sleep and eat for free. Or, it could be McCoy’s take on human life, but I hope not, otherwise it would make him as cynical, disillusioned and depressed as Gloria. Throughout the book, she keeps telling Robert she wishes she were dead and finally begs him to kill her.

The cops arresting Robert ask why he did it? The former farm boy, recalling a plow horse that broke its leg, answers, “They shoot horses, don’t they?”

Horace McCoy pulls no punches in this book, and some of the language is surprisingly coarse for a novel published in 1935. Several times Gloria snaps off a “f— you” at people, which the publisher printed just that way. She tells off some do-gooders in colorful language and urges a fellow dancer to get an abortion, nearly causing a fight between Robert and the girl’s husband. And Gloria, for cash or advantage, has a quickie under the bandstand with the sleazy master of ceremonies. All this makes They Shoot Horses, Don’t They? sound like an unsavory novel, but McCoy’s talent keeps everything moving and understandable, and for a book about people going round and round in a circle, there is not a dull passage.

After reading the book, I looked for newsreel footage on these kinds of events. Here is a YouTube clip about 1930s dance marathons. Just about everything shown here is also in McCoy’s book.

(For more posts on books, head over to Todd Mason's blog. He is compiling this week's Forgotten Books list for Patti Abbott.)
Posted by Elgin Bleecker at 1:26 AM