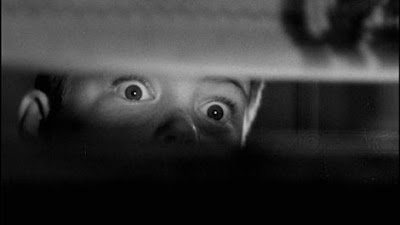 At 4 a.m. Friday, Turner Classic Movies is scheduled to show the 1949 film noir, “The Window.”

This movie, adapted from a Cornell Woolrich story, is about a boy who makes up stories, tells whoppers and outright lies, only to find no one will believe him when he says he witnessed the upstairs neighbors killing a man. But the murderers believe him, and they come after him.

This was by far the scariest movie I ever saw on TV when I was a kid. The 73-minute picture holds up today. And, about a dozen years ago, I found it had the same effect on a new generation.
Posted by Elgin Bleecker at 11:28 AM
Labels: Cornell Woolrich, Film noir, The Window