They Don’t Dance Much by James Ross 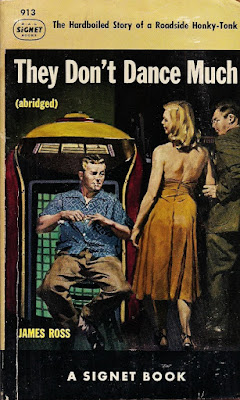 Raymond Chandler may have summed up James Ross’ They Don’t Dance Much best when in a 1954 letter he wrote, “…a sleazy, corrupt but completely believable story of a North Carolina town.”

Chandler also said of Ross, “I’ve never heard that he wrote anything else.”

He was right. The 1940 book was Ross’ only published novel. And what a novel it is.

The story, set in rural North Carolina in the 1930s, is hard-boiled noir.

Jackson McDonald, who everyone calls Jack, is a little better educated than most of the residents of the town of Corinth and its surrounding farming community, but that does not help him financially. The family farm is failing and he is deeply in debt with no immediate way of digging himself out of trouble.

But if Jack thought he was in trouble before, it is nothing compared to the problems he gets himself into when he accepts a job from Smut Milligan, a thuggish bully who runs a gas station a few miles from town.

Smut’s property, which is beyond the municipal limits, is the perfect spot for a roadhouse he plans to build. Along with food and dancing, he can also sell illegal liquor and run poker and crap games. Smut wants Jack to work for him and puts him in charge of the cash register.

The other help Smut employs are a handful of Corinth ne'er-do-wells he does not have to pay, but will allow to eat and drink and pick up tips. Interestingly, the only employees of Smut’s roadhouse with any integrity and talent for their jobs are the two black men hires as cooks.

Once up and running, the roadhouse does good business, but not good enough for Smut. He wants more. He is in debt to Astor LeGrand the power behind the town, a shrewd, dangerous man. Smut also needs money to entertain Lola, the wife of the richest man in town. To get what he wants, he hatches a robbery plot and involves Jack in his scheme. And since this is noir, the execution of the plot goes wrong and has serious consequences – physical and mental – with Jack suffering long after the first event. But do not feel sorry for him. Jack is no saint.

There is a long passage of extreme violence in this book, and it is tough to get through. There is also language folks today will find offensive.

The book takes a while before the violence occurs, but the anticipation of it and the colorful setting and characters and Ross’ deceptively plain, down-home style keep the pages turning.

James Ross obviously knew the terrain and the people well enough to accurately depict the many types who populate his fictional town of Corinth. (I am assuming Ross' Corinth is fictional. A quick check shows several towns called Corinth in North Carolina.)

The Mysterious Press republished the book and had this biography of Ross: “James Ross (1911-1990) was an author of noir fiction. He published They Don’t Dance Much in 1940, and though this hard-bitten story of life and death in a small town roadhouse won acclaim from authors like Raymond Chandler and Flannery O’Connor, it did not sell well.

“His follow-up novel, In The Red, was never published, and Ross turned to writing short fiction for magazines like Collier’s, The Sewanee Review and Argosy. In 1970, he became a highly-regarded literary agent, and 1975 saw the reissue of They Don’t Dance Much, which saw the book become truly popular for the first time. Ross died in 1990 in North Carolina.”

The publisher also noted, “Jonathan Yardley, a former colleague of James Ross, wrote about They Don't Dance Much in The Washington Post. It provides some fantastic insight, placing the book into historical and personal context.” The article is here.

For fans of noir crime novels, They Don’t Dance Much is a must read.