No Country For Old Men, the book 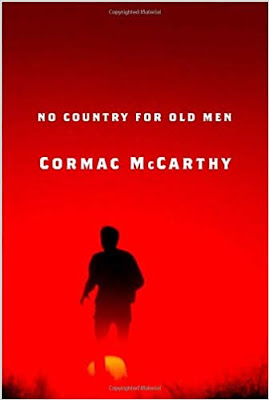 Cormac McCarthy’s No Country For Old Men is an excellent crime novel and a fine book.

If there is a sense of surprise in that statement, it is because I did not care for the 2007 movie based on it. I avoided the book until recently. I should have known better. McCarthy is a hell of a good writer, if one with a very bleak take on life.

No Country For Old Men, published in 2005, is well crafted, involving, and often stunning.

In it, McCarthy sets up three parallel stories that take place in 1980.

Llewellyn Moss, a 36-year-old Vietnam vet living in West Texas, comes upon the scene of a massacre. Out in the desert, two rival drug gangs shot the hell out of each other. They left a lot of dead bodies and a satchel containing $2.4 million in cash. Moss takes the money  and runs off, thinking no one will ever know. But readers know something and he does not. There is a hired killer after him.

A mysterious and lethal weirdo named Chigurh is sent to retrieve the money and in no time is on Moss’ trail. He lives by his own code and no one, but no one, gets in his way or stops him.

No matter where Moss runs or how clever he thinks he is, he has Chigurh after him.

The third story is about Ed Tom Bell, a county sheriff in his late 50s, who starts following the bloody trail of Chigurh. While Bell is experienced and cautious, readers will stress themselves out worrying about him, too.

Cormac McCarthy writes some of the most dead-on, authentic dialogue. But, if I have any bone to pick with the book, it is that I wish he had placed quotation marks around the characters’ lines.

If people skipped this novel because they saw the movie, I would urge them to go get a copy and read it.

(Also, check out my crime novel, Lyme Depot. Thanks.)
Posted by Elgin Bleecker at 2:34 PM
Labels: Cormac McCarthy, No Country For Old Men