The Pulp Jungle by Frank Gruber 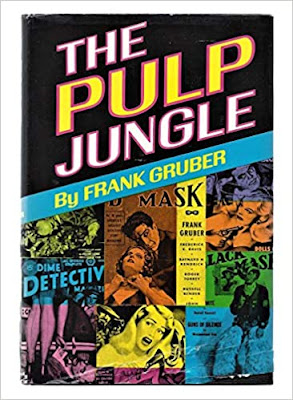 A book I long wanted to read and finally got my hands on was Frank Gruber’s The Pulp Jungle.

This was his 1967 memoir of becoming a writer for the pulp magazines in the 1930s.

Aside from the accounts of living in flea-bag hotels, and hammering out dozens and dozens of stories on a manual typewriter, his book is full of stories about his fellow writers – some of them famous, some of them not so. They helped each other, introduced each other to editors, shared their experiences in the pulp market and gave tips and advice.

It was not all work and no play. Gruber talks about the many get-togethers with other writers for lunch, drinks and parties.

He tells a great story about one of those parties:

...George Bruce, who had a temporary apartment in Brooklyn, gave one. It was a rather small apartment and the thirty-some guests who were there were jammed into the place so that you could hardly move around. About ten o’clock in the evening George announced that he had a deadline for a twelve thousand-word story the following morning and had to get at it. I assumed that it was a hint for the guests to leave, but such was not the case at all. George merely went to his desk in one corner of the room and began to bang his electric typewriter. George sat at that typewriter for four solid hours, completely oblivious to the brawl going on around him. At two o’clock in the morning he finished his twelve thousand words and had a drink of gin.

The Pulp Jungle is a must read for any writer, for any reader of pulps, and for anyone interested in the lives, struggles and laughs of people working their way through the Great Depression.

Posted by Elgin Bleecker at 5:12 PM