Kiss Her Goodbye by Wade Miller 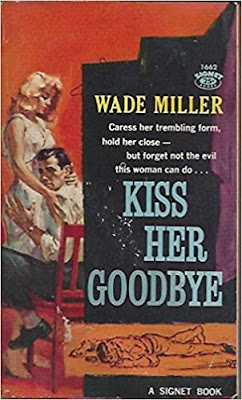 Back in the day, you could walk into a store and buy a 45. I am talking here about 45 rpm records, not .45 caliber automatics.

Those seven-inch, black vinyl recordings had a song on each side. The A side was the one the artists expected to be popular. But occasionally, the B side became the hit.

For me, something similar happened with Stark House publishers’ two books in one volume of Wade Miller crime novels.

The first story, Kitten With A Whip, may be the more famous of the two. But the second book, Kiss Her Goodbye is a terrific read.

Kiss Her Goodbye captured me in the first pages with its sense of impending tragedy. The suspense grew and had me on the edge of my seat.

The novel, published in 1956, is about Ed Darnell, a man in his late 20s, who rolls into a small, Southern California desert town with his sister, Emily, who is 18 and a knockout. The beautiful girl catches the attention of every male. But something is wrong. Ed and Emily are running from something.

Wade Miller (the pen name of writing team Bob Wade and Bill Miller) take their time rolling out their story. But readers will sense something is very wrong. They will worry about Emily’s safety. And they will be caught up in Ed’s struggle to protect her from the local wolves.

The worst of the wolves is Cory, the smiling, overly friendly, local business man, who employs Ed as a truck driver. Once Cory, a married-man and a pillar of the community, gets a look at Emily he goes on the hunt for her.

A young woman as good looking as Emily should have had plenty of practice deflecting the advances of guys like Cory. But Emily has a problem. While physically she is a grown woman, mentally she is an overly trusting child.

Ed knows he should commit her to a home, but cannot bring himself to do it. He could not afford a nice place, and state run institutions in that era could be hell holes. So, for years Ed has taken care of Emily.

Further complicating his problem is Emily’s propensity for violence when frightened. Men on the make who scare her can wind up in a world of hurt.

(Also, check out my crime novel, Lyme Depot. Thanks.)