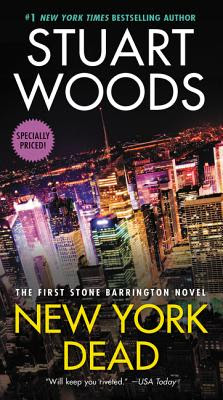 When this novel opens, Stone is not yet rich or a lawyer, but he is cool. Cool enough to eat at Elaine’s, a Manhattan restaurant frequented by celebrities.

Stone is a 15-year veteran of the New York Police Department and one of its detectives. While on medical leave after taking a bullet in the knee, he witnesses a woman fall from a 12-story building, landing on a hill of dirt in a neighboring construction site. Miraculously, the woman lives. An ambulance is called.

Did she jump? Did she fall? Was she pushed? The latter seems the best scenario when Stone pursues someone fleeing the woman’s building. His bad knee keeps him from making an arrest.

Although he is supposed to be home recovering, he convinces his superior to let him take the case, along with his partner, Dino Bacchetti.

As if surviving a fall from a high building is not enough of a twist, when Stone and Dino check on the woman’s condition they learn she disappeared from the ambulance taking her to the hospital. Complicating matters, the woman is a well-known TV news anchor.

The police brass, anxious to close this case and get it off the front pages and the evening news, railroad a suspect Stone believes innocent. Going head to head with his superiors gets Stone bounced off the force on the pretext that his knee will never recover well enough for him to resume his duties.

But Stone – one of the luckiest characters in mystery fiction – runs into an old pal, an attorney at a prestigious law firm. The firm could use someone with Stone’s experience. And just like that, Stone is drawing a big salary while continuing his own investigation of the woman who fell.

What may be surprising to readers of the later Stone Barrington books is how much Stone and Dino clash in this first novel. It is not until the end that they seem to form a real friendship. Dino will continue being a prominent character in the later Barrington books.

To date, Stuart Woods has published 61Stone Barrington novels. They are fast, enjoyable reads. His first novel, Chiefs, from 1981, is a rural mystery spanning several generations in a Southern town. It won an Edgar Award.