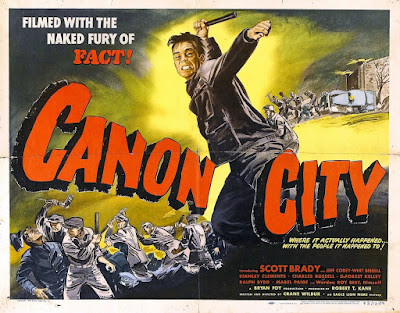 Released in 1948, “Canon City” is a modestly-budgeted prison picture with several things going for it.

First, this docu-noir film is based on a true story from 1927 in which a gang of convicts broke out of the Colorado Territorial Correctional Facility at Canon City, Colorado. Part of the movie was filmed at the prison and around Canon City (which should be called Canyon City according to the Spanish spellings used there). Built in 1871, in the harsh landscape of rocky, treeless hills, the CTCF is still there and is the oldest prison in the state. Photos Googled up show a stone structure with guard towers that looks more like a movie set than a real place.

Next, the star of the picture is a young Scott Brady. Brady in real life was the tall, tough brother of tall tough actor Lawrence Tierney who was the tough old gang leader in “Reservoir Dogs.” Brady’s character is forced to participate in the prison break. Once on the outside, he does all he can to keep the others from killing anyone or harming local residents.

Next, there are a couple of sequences that make “Canon City” a thriller. One scene would have done Alfred Hitchcock proud. The men who bust out of prison, split up and because it is winter, and because they need a sure way out of the area, the men barge into several homes looking to steal guns, cars and food. In one sequence, a group of cons holds a family hostage and demands food. The old granny goes into the kitchen to fix them something to eat and while there and out of sight of the baddies, she must decide whether to feed them or to bash in the ringleader’s head with a hammer. It’s a great scene.

And last, the film was photographed by John Alton, the great cinematographer of so many moody black and white noir films like "The Scar" from the same year.

“Canon City” was written and directed by Crane Wilber and produced by Bryan Foy. Also in the cast were Jeff Corey, Whit Bissell, and DeForest Kelly, 18 years before he played Doc McCoy on “Star Trek.”

(For more posts on film and television, check out Todd Mason’s blog.)