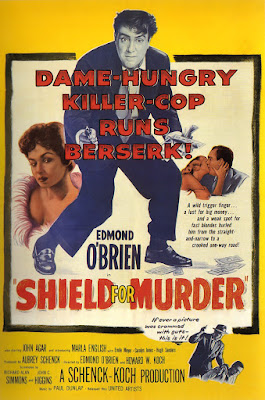 Old Hollywood could not produce a film with a lead character like Barney Nolan, at least not the Barney Nolan of William P. McGivern’s 1951 novel Shield for Murder.

In the book, Philadelphia police detective Barney Nolan is a bad cop who hits rock bottom. In the 1954 movie, “Shield for Murder," Barney Nolan, as played by star and co-director Edmond O’Brien, is a complex man, not particularly good or bad, just human, who makes a series of bad – really bad – decisions and goes down the moral drain.

Both book and movie start with Nolan killing a bookie in order to rob the man and then claiming it was an accident, a warning shot gone wild. Nolan, in both versions wants the money to win a girl.

In the book, Nolan needs the money to lavish expensive jewelry on a nightclub singer who has no romantic feelings for him. In the movie, he wants the money to marry a nightclub cigaret girl, buy a small house in the suburbs, move there and live his own vision of the American dream.

Characters like Nolan who make criminal choices for women are a staple of film noir. In the hands of a director like Fritz Lang or Anthony Mann, this movie could have been a great addition to that genre. But as it is, “Shield for Murder” does not reach that level. Still, it is not a bad little crime picture.

The movie might get a better grade from me if I had not read the McGivern novel right before seeing it. (A post about McGivern’s book is here.)

Aside from Nolan’s motivation to commit murder, there is another interesting difference between the book and the movie. In the book, the man who starts suspecting Nolan is a murderer is Mark Brewster, a young newspaper reporter. In the movie, Mark Brewster is Nolan’s police partner. The change may have been dictated by the old Hollywood production code.

O’Brien, who co-directed with producer Howard W. Koch, may have miscast himself in the movie. Robert Ryan and Robert Mitchum could play hard guys on the edge and capable of going over to the dark side. In McGivern’s book, Nolan is a big, violent thug who scares the hell out of everyone. The movie’s Barney Nolan is a softer, almost sympathetic guy, thanks to O’Brien’s personality and skill as an actor. (O’Brien deserves a post about his career.)

As Nolan's partner, actor John Agar is wooden and not nearly as good as he was in his first film - John Ford’s “Fort Apache.” Also in the cast is the great, gruff Emile Meyer as a captain of detectives who also suspects Nolan. The cigaret girl is played by Marla English, who did a handful of films in the 1950s. Carolyn Jones has a nice supporting role as a woman in a bar trying to pick up Barney Nolan. Others in the cast who became regulars on TV are Claude Akins, William Schallert and Richard Deacon.

Overall, “Shield for Murder” is an OK picture, but the book is a lot better.

(For more posts on movies and television, check out Todd Mason’s blog.)