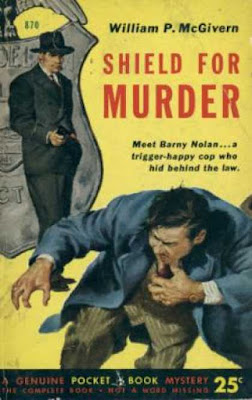 The first sentence of Shield for Murder is a grabber:

“The man Nolan planned to kill came out of an all-night taproom about one o’clock in the morning.”

William P. McGivern really knew how to get a crime novel up and running.

In this 1951 book, Barny Nolan is a Philadelphia police detective who got on the force and rose through the ranks by luck and political connections. In his youth, he was the muscle behind a district boss. Now pushing 40, Nolan is still violent with a built-up resentment for anyone with money, anyone with power, and anyone in his way. He kills the man who comes out of the taproom, a bookie, so he can steal his bankroll. Nolan needs money to impress a nightclub singer, but is unaware that she has no interest in him. In the bookie’s pocket is a huge wad of cash belonging to a local racketeer. Taking it does not worry Nolan. He figures that as a cop he can derail any investigation and get away with it.

But nothing ever goes smoothly for Barny Nolan.

Not only does the gangster find out he took the money, but also a young newspaper reporter, Mark Brewster, suspects Nolan of murdering the bookie.

Brewster starts putting a case together against Nolan, but runs into resistance from the cops when he tries to tell them that one of their own is a bad guy. He also makes a target of himself when Nolan learns Brewster is investigating him.

McGivern paints a dark, seedy picture of the City of Brotherly Love. How accurate a picture, I cannot say having only visited Philadelphia a couple of times as a tourist, eating cheesesteak sandwiches, visiting the Liberty Bell, and, yes, running up the steps of the art museum with a couple of my young nephews. (No, I did not raise my hands like Rocky. But they did). McGivern’s Philadelphia felt genuine through his descriptions of the neighborhoods, the police precincts, and the taprooms. (By the way, can anyone from Philly tell me what a taproom is, or was? Was it a small pub? Was it a bar that only served beer?)

For a while, William P. McGivern was a newspaper reporter in Philadelphia and several of his crime novels were set there. Shield for Murder and other McGivern books like Odds Against Tomorrow, The Big Heat, and Rogue Cop were made into Hollywood movies. McGivern died in 1982 at age 63.

(An earlier post on McGivern’s novel The Crooked Frame is here.)