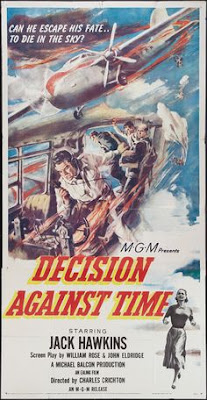 The 1957 British film, “Decision Against Time,” is the simple but tension-filled story of a test pilot for an aircraft manufacturer who, while demonstrating a new cargo plane to a potential buyer, has engine trouble and is forced to fly the damaged plane until it is safe to land, all the while wondering when the engines will completely fail and the whole thing crash down into a suburban neighborhood.

Jack Hawkins does a terrific job playing the pilot who is sweating out the ordeal. Hawkins may not be remembered today, but he was a major talent and appeared in many big movies like “Lawrence of Arabia," "Ben Hur," and “The Bridge on the River Kwai.” He also starred in many smaller films, including the excellent, “The Cruel Sea,” where he played the commander of a British ship during World War 2 and which may be his best performance. He was also in another good airplane-in-trouble movie called “No Highway in the Sky,” where he co-starred with James Stewart and Marlene Dietrich.

A familiar face in “Decision Against Time” is mild-mannered Donald Pleasence, playing the mild-mannered client the company is trying to impress. This was years before Pleasance reinvented himself in horror movies of the 1970s and 1980s.

The picture was directed by Charles Crichton, a versatile filmmaker who did the great Alec Guinness comedy “The Lavender Hill Mob” in 1951, and “A Fish Called Wanda” in 1988.

“Decision Against Time” was written by William Rose, an American who worked in England and who could create thrillers as well as comedies.

The film was produced by MGM and the Ealing Studios. Ealing is best known for its comedies, but it was a company that also turned out well-done dramas.