FFB: Where the Boys Are, Glendon Swarthout's novel of Spring Break, Sun and Sex 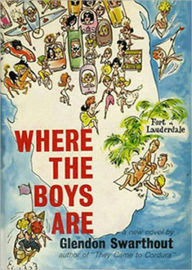 Right about now, thousands of college students are thinking about or heading out for spring break. So, it is a good time to look back at spring breaks past.

Other than a couple of newspaper articles in the late 1950s and a feature in Time magazine, the first major chronicle of kids hitting the beaches was Glendon Swarthout’s 1960 novel, Where the Boys Are.

In the book, two coeds, Merritt and Tuggle, travel from their cold, Midwestern college to Florida where they meet and bed a series of men – sometimes the same men – and party like crazy.

As fast as the girls and guys meet and hook up, they move on with only the memories of some so-so sex, except for one night of passion when Merritt and a musician get into some experimental sex and rock each other’s worlds. While the musician is the only one to show any signs of commitment – he wants to take her with him to San Francisco – Merritt is noncommittal, and soon has something more important and complicated to think about. Which of these guys, she wonders, is the father of the child she is now carrying?

Where the Boys Are is a comic novel, but not a laugh-out-loud comedy. The humor is dark and subtle and meant more to shock the parents of beach-bound students than to titillate those not old enough or financially able to take the trip. To those who go, it is something of a warning, but not a preachy one.

Glendon Swarthout (1918-1992), according to some brief, on-line biographies, taught at Michigan State University in the mid-1950s. After hearing spring break stories, he went to Ft. Lauderdale in 1958 to check it out for himself. The book was the result.

Swarthout was an interesting writer. Among his novels were several westerns including The Shootist, which was later made into a film starring John Wayne.

College kids getting away for spring break goes back a lot further than the 1950s. Students who could afford it were doing it in the early 1900s.

Ft. Lauderdale became a destination in the 1930s when the city built an Olympic-size pool and promoted the facility to college swim teams. The teams went, an annual swim meet was created, more and more students heard about the gathering and over the next couple of decades hundreds of kids flocked to the beach.

By the late 1950s, about 20,000 students went there for spring break. After Swarthout’s book and MGM’s movie of it came out, the numbers more than doubled. It got so big the mid-1980s saw several hundred thousand descend on the city. Ft. Lauderdale decided it did not need the headaches of being overrun every spring. The city began promoting itself as a great destination for families. Nothing throws a wet blanket on a wild party like the idea of a vacation with parents. For a while, the students moved up the highway to Daytona, and later to the Florida panhandle.