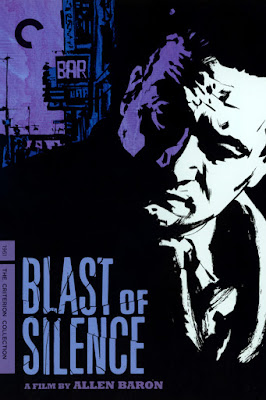 Frankie Bono, an out-of-town killer hired to take out a New York crime boss, spends several days stalking his intended victim, learning the man’s routines, and picking the best spot to do the job in the off-beat, low-budget, noir film, “Blast of Silence.”

The grim, stoic Frankie, played by Allen Baron, who also wrote and directed this independently made, 1961 feature, goes about his business during the Christmas season and the contrast between the hired gun moving among the happy shoppers is striking.

More striking is the divided nature of Frankie. While he is a cold-blooded pro, he is also a lonely hitman. Accidentally running into an old buddy, Frankie is invited to a party, meets a girl, and desperately goes after her, stopping just short of rape. This makes for a very strange tangent in this odd, intriguing movie.

The many scenes of Frankie doing his job – contacting the man who hires him, buying an illegal gun, and following his target – are accompanied by strangely poetic narration. But it is not the usual first-person narration commonly found in film noir. It is second-person narration delivered, uncredited, by once-blacklisted actor Lionel Stander – he of the distinctive, gravely voice, who later co-starred on TVs “Hart to Hart.” The narration was written by once-blacklisted writer Waldo Salt, under the pen name, Mel Davenport. Salt later wrote the screenplays for “Midnight Cowboy,” and “Serpico.” The voice-over comes from an omniscient character who is talking to Frankie, commenting on his thoughts and actions, rather than informing the audience.

Shot entirely on the streets of New York in a documentary style, “Blast of Silence,” has the look and feel of early John Cassavetes and Stanley Kubrick films and is nearly a decade ahead of Martin Scorsese’s first efforts.

The movie was co-produced and photographed in gritty black and white on dark dreary days by Merrill Brody, a friend of Baron’s since grade school. Another plus is the film’s jazz score by Meyer Kupferman.

This excellent, 77-minute movie was originally released by Universal-International and has recently been given a new life on DVD by Criterion.
Posted by Elgin Bleecker at 5:37 PM
Labels: Allen Baron, Blast of Silence, Film noir, John Cassavetes, Martin Scorsese, Stanley Kubrick