Death Wish, a Movie Hit that Missed the Mark 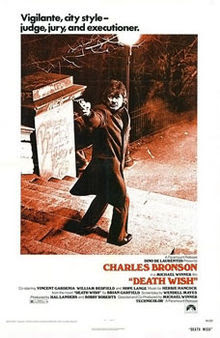 "Death Wish," a 1974 movie based on a Brian Garfield novel, missed the point of the book and became a boxoffice smash.

In Garfield’s novel (reviewed here), middle-aged accountant Paul Benjamin, a man who could have been played by Jack Lemmon, is traumatized and enraged by the death of his wife and the near-death of his daughter at the hands of some New York City thugs. The police seem to be doing little to stem the rise in street crime and they have no hope of ever finding and arresting the men who assaulted Paul's family. He comes to believe the only solution is to get a gun and rid the city of criminals on his own. His repeated killings are part of his mental breakdown.

In the movie, middle-aged architect Paul Kersey, played by tough-guy star Charles Bronson, is  enraged at what happened to his wife and daughter. The scene of their attack is shocking in its brutality. (Almost as shocking as seeing  Jeff Goldblum playing one of the violent creeps.) After that scene, audiences were with Paul as he took to the streets, tempting punks to attack him, then blowing them away.

For the movie, Paul’s agony and psychological damage are reduced to quickly get to the action. Garfield spent a great deal of time – nearly half the book – describing Paul’s mounting anger and showing his descent. The movie’s Paul is angry, too, but he is soon provided with a solution.

After his wife’s funeral, Paul’s firm sends him to Arizona to supervise a development project. Changing Paul’s profession gave the filmmakers a chance to show Bronson in the desert sunshine overseeing the operation. On his last day out west, Paul is given a gift by a grateful client. The gift, he discovers on his return to New York, is a revolver. The gun goes into Paul’s coat pocket and Paul heads out into the streets at night hunting for bad guys. The movie becomes a blood fest as cool, cold-eyed Bronson knocks off criminals on streets, in parks, and on subways.

Director Michael Winner was an expert at staging violent scenes. He had worked with Bronson on three previous action films. They went on to do two “Death Wish” sequels. Two additional sequels starring Bronson were not directed by Winner.

The gunplay thrilled audiences. Seeing dirtbags get it, was highly seductive stuff. The filmmakers made it clear everyone Paul shot deserved it.

While Paul's transition from helpless victim to active vigilante was quick, Charles Bronson made the most of it, turning in a good performance. Later, when faced with a variety of dangerous situations, Bronson was too sure, and the only suspense was in how far he would let a potential mugger mess with him before he let him have it.

The movie left viewers cheering Paul who eludes the police until the end. A detective, played by Vincent Gardenia, catches up with him, and sounding like the sheriff in a western tells Paul to get out of town. Paul takes his advice. Arriving in Chicago in the last scene, he witnesses a group of toughs jostling people. He points his finger at them, in a gesture meaning they are in his sights, and indicating he has not changed, but will continue his one-man mission.
Posted by Elgin Bleecker at 5:26 PM
Labels: action movie, Brian Garfield, Charles Bronson, Death Wish, Michael Winner