FFB: The Killing by Lionel White 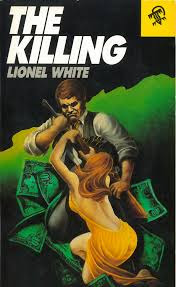 Johnny Clay plans the perfect caper, a racetrack heist, worked out and timed to the split second in Lionel White’s 1955 novel, The Killing. Clay had four years to figure out the details while serving time in Sing Sing. Once out, he puts his plan into play.

He recruits four men, all in need of money – big money – and all clean. They have no police records. Each also has something Clay requires for his scheme to work.

Marvin Unger, a sour little man needs to make up his heavy losses in the stock market. Big Mike Henty, a racetrack bartender with a weakness for the horses, needs money to move his wife and daughter out of the slums. Randy Keenan, a police officer, owes big dough to a loan shark. And George Peaty, a race track cashier, needs lots of money to please his hot, young, high-maintenance wife, Sherry.

Sherry, who is seeing a smooth gangster on the side, poses an early complication in the story. To impress her and assure her he is going to come into money, Peaty tells her the set up. He does this against Clay’s strict orders for everyone involved to keep his mouth shut.

Johnny is the only cool pro among his gang of amateurs. Each of the others has his doubts and fears. And, as often happens in a Lionel White novel, the carefully planned robbery has too many ways of going wrong. If any one of his men screws up, they could all wind up in jail – or dead. 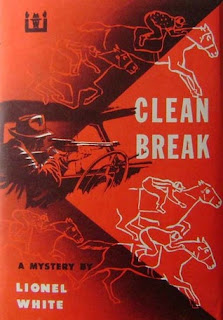 Lionel White's writing has the clean snap of someone who spent many years knocking out newspaper copy and editing crime stories. He started his writing career as a reporter in the 1920s. He later became a newspaper editor and went on to edit detective magazines. The Killing (originally published as Clean Break) is probably his best known novel. He wrote 38 books between the early 1950s and the 1970s, including The Snatchers (which I wrote about here).

White's characters all ring true. He does not do lengthy descriptions of people or places, but gives the reader enough to form vivid mental pictures.

This is a second reading of The Killing. The first was more than 20 years ago when I picked up a 1988 Black Lizard paperback reprint of the novel. Even though I knew the story – as well as the Stanley Kubrick film version – The Killing still delivered a punch.