FFB: The Killings at Badger’s Drift by Caroline Graham 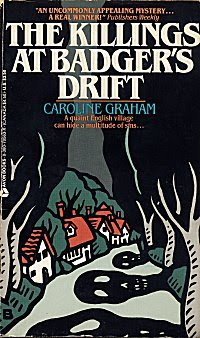 The 1987 who-done-it, The Killings at Badger’s Drift, is not the kind of book I usually read, but I’ve enjoyed the British television show, “Midsomer Mysteries,” based on it and the subsequent books by Caroline Graham, so I was curious to see how the series began.

In The Killings at Badger’s Drift, Graham introduces Detective Chief Inspector Tom Barnaby, his junior officer, Detective Sergeant Gavin Troy, and Barnaby’s wife Joyce and daughter Cully, as well as the fictional county of Midsomer, its largest town, Causton, and the rest of the area dotted with picturesque villages.

Badger’s Drift is a tiny English hamlet that seems serene and quaint on the outside, but inside is roiling with all sorts of nasty business. The homes are close enough together to allow the neighbors to know all the comings and goings and everyone else’s business.

One day, Emily Simpson, a retired school teacher, and her friend, Ms. Bellringer, are out in the woods hunting for rare flowers. They separate and after Ms. Simpson spots a rarity, she is shocked by the sight of a couple getting it on in the bushes. Upset by what she has witnessed, she dashes home. The next day she is found dead on the living room floor.

Ms. Bellringer suspects foul play and reports her suspicions to the police. When Sgt. Troy does not seem interested in her story, she insists on speaking to a higher ranking officer. And that is how the case drops on DCI Barnaby.

Barnaby promises to check into the death, calls in the police doctor to have a look and poison is found in the woman's system. The inspector has a murder case on his hands.

Barnaby’s even handed methods of questioning suspects and collecting clues, and his gruff guidance of Troy, made for a breezy and enjoyable read.

For more on the DCI Barnaby series, Graham and the television program, see B.V. Lawson’s post on this book.