FFB: The Thefts of Nick Velvet by Edward D. Hoch 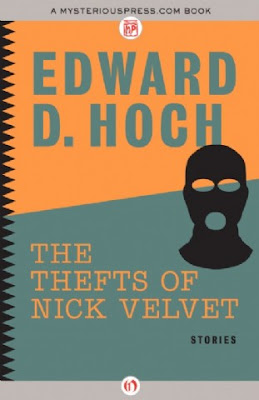 Nick Velvet is a thief, but not any ordinary thief or even a high-toned thief with expensive tastes. Nick is a thief who specializes in impossible grabs of odd items. He never seals money or jewelry or artwork.

People contact him when they want something unusual stolen and for which they are willing to pay Nick’s fee of between $20,000 and $30,000.

In The Thefts of Nick Velvet, a 1978 collection of short stories by Edward D. Hoch, Nick is hired to steal things like a rare tiger, a major league baseball team, and the water from a man’s swimming pool. In that last, Nick was not allowed to just drain the pool, he had to steal all the water and deliver it to his client.

In my favorite of the 13 stories, Nick is hired to go to a rich man’s country house, break into a store room and steal what he finds there. When Nick arrives at the estate he finds the room empty. So what is there to steal?

The stories usually have at least two mysteries: How will Nick pull off the caper, and, why do his clients want those strange items? Both are cleverly solved by Hoch in a deceptively simple, breezy style.

Most of the stories in this collection first appeared in Ellery Queen’s Mystery Magazine between 1966 and 1975. Hoch (1930-2008), a prolific writer, had a short story in every issue of the magazine for 34 years.