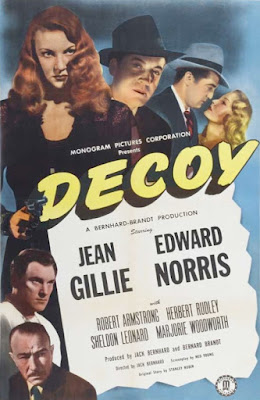 One of the looniest crime movies I have ever seen is “Decoy,” a low-budget picture from 1946. This one has to be seen to be believed.

The story is a fairly routine tale of betrayal by a femme fatale whose lover is in prison, facing execution, and refusing to reveal where he hid the cash from an armored car robbery.

But there is a science fiction twist to the tale that is riveting. The woman learns of a drug that will revive the dead, but only if administered within one hour of death.

Her plan is to use sex to recruit the prison doctor. He will fall for her, do whatever she wants, take charge of the body, transport it to his office and bring the mug back to life. The woman also recruits the executed gangster’s rival, her new lover, who will force the no-longer-dead guy to reveal the location of the money.

Director Jack Bernhard builds some decent tension as the hour after the execution is filled with bureaucrat obstacles for the doctor. In the hands of a Hitchcock, the tension could have been prolonged and unbearable.

The real highlight of the picture is the revival, when the doctor applies the drug and the man wakes.

Actor Robert Armstrong (the guy who led the expedition to Skull Island and captured King Kong in that original movie) is amazing as the man who comes back from the dead. This scene alone was worth the price of admission.

British actress, Jean Gillie, played the woman, Edward Norris was the dead man’s rival, Herbert Rudley played the doctor, and Sheldon Leonard played a tough cop on the trail of the missing money.

This movie came to my attention thanks to Steve at Mystery*File.

(For more posts on film, TV and more, check out Todd Mason’s site.)