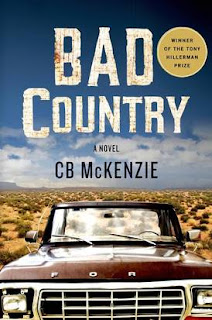 This week, I would like to bend the rules a little with a novel that is not a forgotten book. It is not even an old book. It is a 2014 mystery by first time novelist C.B. McKenzie, and it is a good read.

Bad Country has one foot in the rocky desert of southern Arizona, and the other in the urban landscape of Tucson. This is where Rodeo Garnet, a former rodeo rider, now a private detective with a somewhat shady past, lives and works.

Several murders have occurred in a sparsely populated county near the Mexican border. The latest victim was found just outside the gates of an unfinished and abandoned development where Rodeo is the lone resident.

The deaths all seem to have a connection to the Native American population living in the area and to people crossing illegally into the United States. That is one story thread.

Another thread begins with a ornery old woman living on a reservation who asks Rodeo to find out what really happened to her grandson, who was found dead under a bridge in Tucson.

The two threads are connected and Rodeo winds up with city cops, county deputies, reservation police, and several murderous bad guys after him as he tries to figure out what is going on in his own backyard.

Author McKenzie does a great job of establishing a unique detective and of making life in the low rent section of Tucson and in the rough desert country come to life on the page.

I hope we see more of Rodeo Garnet.