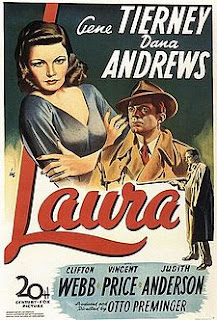 “Laura”, the glossy, intriguing, 1944 murder mystery, appears on many lists of the best noir films.

But is it really film noir?

The setting is not the seedy neighborhoods of American cities, but tony uptown apartments and restaurants. There are no wet cobblestone streets, no bowling alleys, not even a shot of Angels Flight.

The main character, played by Dana Andrews, is not a criminal, nor an ordinary guy who makes a fatally criminal mistake. He is a police detective.

The look of the picture is not particularly dark. There are no deep shadows and odd camera angles. The settings, lighting and camera work are smooth and in the best tradition of old Hollywood. "Laura" was produced by 20th Century-Fox with the studio's A-list players and directed by Otto Preminger.

Even the music is smooth. The theme song of “Laura” is the beautiful David Raksin tune, not the pounding scores of Miklos Rozsa or Bernard Herrmann.

So what makes “Laura” a noir?

A good portion of the story is told in flashback as the detective questions friends of a murdered young woman, played by Gene Tierney. That is a noir technique.

From these flashbacks and from the alluring portrait of Laura hanging in her apartment, the detective finds himself attracted to and soon obsessed with the dead girl. OK, now we are entering noir territory.

The cop returns often to her apartment, the scene of the crime. He reads her letters, he helps himself to her liquor, and he gazes at her portrait. One of the girl’s friends even chides him for falling in love with a corpse.

At this point in the film, viewers really have something to worry about. From routine work, to curiosity, to obsession, the detective could be lost in noirland.