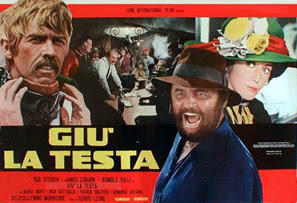 “Duck, You Sucker” from 1971 is the last, and arguably the best, of the Sergio Leone spaghetti westerns.

In this movie, which is also known as “A Fistful of Dynamite,” Rod Steiger plays a poor Mexican bandit who, with his six sons ranging in age from little children to older teens, robs and humiliates the rich and finds himself an unwilling participant in a revolution occurring around 1914.

Steiger teams up with an Irish national and explosives expert, played by James Coburn, who has dreams and nightmares of his own country divided by revolution.

Leone’s history may be deliberately inaccurate to make a political statement and to create some interesting dramatic tension between the two men. Throughout the movie, Steiger is intense and opposed to the revolt which, he tells Coburn, brings only death to the poor. Coburn is cool and detached, having survived a revolt in his own country, but he has a change of heart.

Together, Steiger and Coburn plot to rob a bank. They blast their way in and, in a plot twist, Steiger is hailed as a hero of the people for his actions, an honor he rejects, but a situation he cannot escape. From there the film moves on to bloody reprisals, violent ambushes, and full battle scenes.

While there is a good deal of action, and a lot of humor, this is a far more serious film than Leone’s earlier Clint Eastwood movies.

In true Sergio Leone style, the 2½-hour film unfolds at a deliberate pace. It is both grand and personal. There are scenes involving hundreds of extras, horses, trains, and there are scenes between the two stars played in Leone's well known lower-lip to eye-brow close-ups.

“Duck, You Sucker” was beautifully photographed by Giuseppe Ruzzolini, with music by Ennio Morricone.

(This one is for Randy Johnson, who posted many reviews of spaghetti westerns on his blog, and who passed away last weekend.)
Posted by Elgin Bleecker at 12:11 AM
Labels: Duck You Sucker, James Coburn, Rod Steiger, Sergio Leone, spaghetti westerns