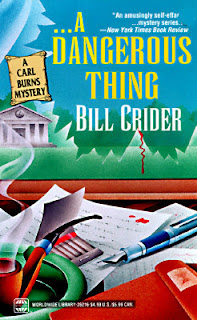 A Dangerous Thing, which works just fine as a stand-alone, is an intriguing mystery and an enjoyable look back at campus life, told in a smooth, breezy style.
Posted by Elgin Bleecker at 9:43 AM
Labels: A Dangerous Thing, Bill Crider