FFB: The Mystery of the Stolen Hats 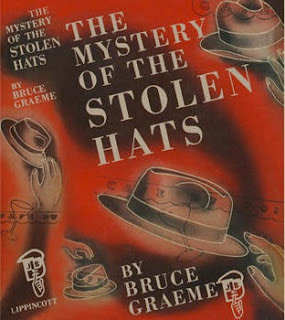 The 1939 novel, The Mystery of the Stolen Hats, is a humorous story that starts with a missing American, leads to a murder, then to a suspicious death, and all the while weaving in a story about a hat thief.

Superintendent William “Big Bill” Stevens of Scotland Yard, is asked as a favor by a high ranking official to get a line on an American businessman who was scheduled to arrive in England but never showed up. Stevens tracks the man’s movements to France.

Arriving in Paris, Stevens is met by his old friend, Inspector Pierre Allain of the Sûreté Nationale. The robust French detective says he will help his stoic British counterpart look for the American and assures him they will find the man in no time. But first, they must dine together. Pierre Allain is fond of fine food. He also claims to be the best detective as well as the greatest lover in all of France.

Author Bruce Graeme takes a bit of pleasure in poking fun at the volatile French inspector. He also shows Allain is an excellent detective.

Before Stevens and Allain can get started on the manhunt, two things happen. An older woman is murdered and her servants, her beautiful adult daughter, and the daughter’s mysterious friend are all suspects. Equally troubling for Allain, someone steals his favorite hat. Men’s hats are being stolen all around Paris and Pierre Allain is determined to get to the bottom of it.

Into this crazy mix of storylines come two more detectives. There is Floquet, Pierre Allain’s arch rival from the Préfecture of Police. It seems the national Sûreté and the Paris based Préfecture have overlapping jurisdiction. The fourth is B.Y. Heck, from Pinkerton’s in the United States, who was hired by the American’s wife to find her husband.

Much of the fun of The Mystery of the Stolen Hats is watching the four detectives deal with each other while trying to find the murderer, search for the missing American and locate Pierre Allain’s hat.

Graeme wrote a leisurely yet well-paced story which judging by the ancient library copy that was located and shipped to my public branch must have been very popular in its day. Almost every page was dog-eared, many of them bent two and three times, some folded so often that librarians of the past had to apply clear tape to hold the corners together. One page had tape over a cigaret burn that made a small hole and a brown spot on the following three pages.

The Mystery of the Stolen Hats was mentioned recently by John Norris on his blog Pretty Sinister Books and that spurred me to find the book. Now, I look forward to tracking down some of the other seven or eight Stevens-Allain novels Graeme wrote between 1931 and about 1940. I suspect the seriousness of World War 2 made writing more lighthearted books impossible.

Bruce Graeme was one of the pen names of the English writer, Graham Montague Jeffries (1900-1982), who turned out more than 60 novels. The figure might be closer to 80. Information on-line about Graeme is sketchy, brief and hard to find.

His books are also hard to find. Hopefully, a publisher will look into reprinting the entire Stevens-Allain series, and I hope the others are as much fun to read as The Mystery of the Stolen Hats.