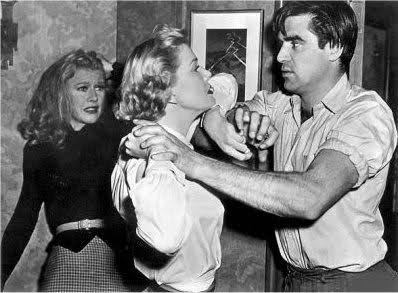 “Storm Warning,” a Warner Bros. picture from 1951 about the Klan in a southern town, is a combination of “Black Legion,” the studio’s 1937 Bogart movie on that subject, and “A Streetcar Named Desire.”

Marsha, a fashion model, played by Ginger Rogers, traveling across the country makes a detour to a small town for a quick visit with her sister Lucy, played by Doris Day.

Marsha is not in town 10 minutes before she witnesses a gang of Klansmen drag a man from the county jail and shoot him down in the street. Hiding in a doorway, Marsha plainly sees two men whose hoods have come off.

Shaken, she meets her sister, Lucy, and Lucy’s new husband, Hank, played by Steve Cochran. Hank was one of the men she saw.

To protect her sister and to get away from her new brother-in-law, Marsha plans to get out of town early the next morning. But county prosecutor Burt Rainey, played by Ronald Reagan, has Marsha picked up and questioned as a witness.

Things heat up for Marsha, Lucy and especially Hank, who is part bully, part simpering coward, when both the prosecutor and the leader of the Klan lean on them.

And when things could not get worse, Hank tries to rape Marsha.

From there, the film slips into an old formula and while not a happy ending, it is not as hard-hitting and memorable as it could have been.

One of the problems is Ronald Reagan. His part is not well written and Reagan was always better as an amiable second lead to stars like Errol Flynn. Doris Day, on the other hand, was a good choice for the young wife so in love that she cannot see that her hubbie is a lout. Ms. Day was a much better actress than people remember. This is also one of Steve Cochran’s better films. Usually cast as a gangster in movies like “White Heat,” here he gets to do a lot more with the part of a wannabe tough guy.

The picture was directed by Stuart Heisler, a Hollywood veteran, who in 1940 made the excellent feature, “The Biscuit Eater.” Heisler does a good job with the material he is given, and brings a taught, noir feeling to the film. The night scenes leading up to the killing are dark and moody, thanks to cameraman Carl Guthrie.

“Storm Warning” was written by Daniel Fuchs, who wrote the screenplay for the 1949 noir classic, “Criss Cross,” and Richard Brooks, who had a long career in Hollywood first as a writer and later as the writer-director of films like “In Cold Blood” and “Blackboard Jungle.”

This fast-moving, 93-minute movie is well worth a look.