Brutal “Shot Caller” is a Movie to Watch 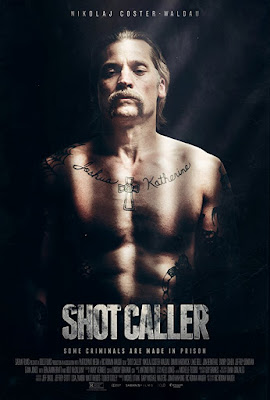 The 2017 prison film, “Shot Caller,” is not like the old movies where Jimmy Cagney found himself in the big house, nor is it like the men-behind-bars exploitation flicks of the 1970s and ‘80s.

“Shot Caller” is a whole new, ultra-realistic look at the violent world behind the walls of American prisons.

Jacob, a successful businessman with a nice family, causes a deadly accident which lands him jail. He is put in with violent criminals and quickly learns the code of survival: Either become a victim at the mercy of the predators, or become a warrior. Jacob chooses the later and as if being sent to jail was not life-changing enough, needing to choose sides in the gang-run prison yard changes his entire being.

Affiliation with the gang not only means participating in drug smuggling, riots and murder, it also means a lifetime membership extending beyond the wire cages when Jacob is released.

Nikolaj Coster-Waldau, an actor I have seen before in small roles, does a superb job as Jacob. His transformation from the hard-charging executive to the hard-bitten convict is quite a performance. Also excellent in the picture are Lake Bell, Jon Bernthal, Omari Hardwick, Emory Cohen and Benjamin Bratt. I could go on naming the players in this movie because everyone did a fine job, most portraying some of the most convincingly tough inmates seen on screen.

Ric Roman Waugh, who knows more than most about prison life, wrote and directed the movie.