“Fort Bliss” is a Movie to Watch 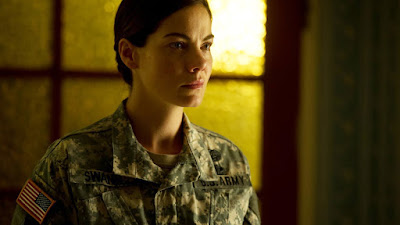 The title comes from an actual U.S. Army base. It and the West Texas suburbs around it are the setting for the story of Sgt. Maggie Swann, a combat medic, returning home after two years in Afghanistan.

She has a bitter ex-husband who is remarried and who has been taking care of their small son while she was deployed. He does not want to send the boy home with Maggie, although that was their original agreement. Two years in the life of a pre-schooler is a very long time and the boy does not remember Maggie.

Maggie has a hard time adjusting to civilians who do not obey her commands and to a little boy she cannot order to love her.

This is a good story, extremely well told by director Claudia Myers. Myers, who came out of documentaries, including films with returning veterans, wrote the script, and this drama has a strong sense of reality.

All the performances are first rate, particularly that of Michelle Monaghan, who plays Maggie. (Where were the Academy members when it was time for the 2014 Oscar ballots?)

Also in the film were Oakes Fegley as her son, Manolo Cardona as the new man in her life, Ron Livingston as her ex-husband, Emmanuelle Chriqui as his new wife, and Freddy Rodriguez, Pablo Schreiber, Gbenga Akinnagbe as fellow soldiers, each with their own sets of problems.
Posted by Elgin Bleecker at 11:11 PM
Labels: Claudia Myers, Emmanuelle Chriqui, Fort Bliss, Manolo Cardona, Michelle Monaghan, Ron Livingston