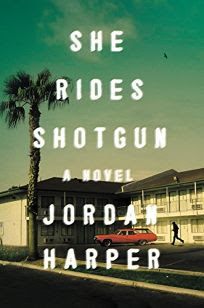 All the praise heaped on Jordan Harper’s 2017 novel, She Rides Shotgun, is deserved. It is a hell of a book.

A large, muscular, tattooed man, just released from prison arrives at a Southern California middle school, puts a little girl into the stolen car he is driving and zooms off with her.

The man is Nate McClusky and the girl is his daughter, Polly.

While in prison, Nate seriously pisses off the head of a powerful gang. The leader puts out an order for members on the outside to track down and kill Nate – and his family.

The gang gets to Nate’s wife before he can save her. But Nate reaches Polly first and they are off on a high-speed road trip.

Nate realizes there is no safe place. The gang has eyes and ears everywhere. He and Polly elude them, and, to protect the girl, Nate teaches her how to fight and survive. Polly learns fast and changes from the quiet, immature schoolgirl who was bullied, into a confidant, self-sufficient young woman.

Despite her increasing toughness, Polly has a good heart. That heart is the bright spot in this dark, suspenseful book.

Harper does a fine job of telling this rocket-propelled story, and more impressive, it is his first novel.
Posted by Elgin Bleecker at 10:14 PM
Labels: Jordan Harper, She Rides Shotgun, suspense novel