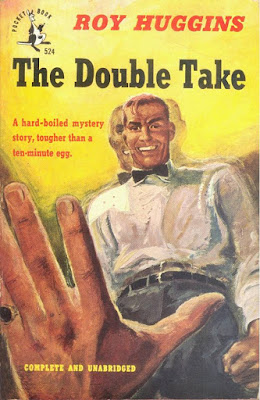 Last year, I posted a piece about Roy Huggins’ 1949 novel, Lovely Lady, Pity Me (here), and hoped this week to post another positive review of one of his books.

But, The Double Take, from 1946, Huggins’ first book, was not as enjoyable as Lovely Lady...

Private detective Stuart Bailey is hired by a public figure to investigate his wife. Recently married to a younger woman, the man received an anonymous phone call vaguely threatening blackmail over something shady in the woman’s past. The man wants to know what it is and Bailey investigates.

There is more than a little Raymond Chandler influence in this story, but Bailey is no Philip Marlowe, and readers have been down these mean streets before.

Huggins (1914-2002) wrote three crime novels in the 1940s and then went on to a successful career in television creating shows like Maverick, The Fugitive and The Rockford Files.

If his character, Stuart Bailey, sounds familiar it is because Huggins created the TV series, 77 Sunset Strip, in which Bailey was played by Efrem Zimbalist, Jr.

There is one more Huggins novel in my TBR pile, 1947’s Too Late for Tears. With one hit and one miss, I am hoping I like this next book more than The Double Take.