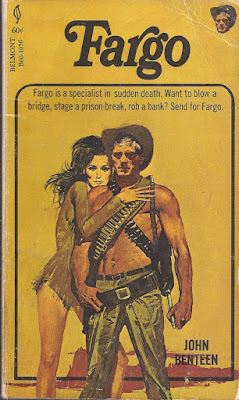 Call it coincidence, call it a sign, call it whatever you want, but there are times when something I have never heard of comes to my attention several times in a matter of days or weeks. At times like that, I get the distinct feeling I had better pay attention.

This has happened to me more than once. It is how, at the turn of the millennium, I came to read Richard Yates’ great novel, Revolutionary Road. That was years before Hollywood turned it into a movie – a movie I have not seen out of respect for the book.

This summer, it happened again when several different people wrote about a Western-action series of books by John Benteen featuring a character named Fargo.

And, as luck would have it, I found a used paperback of the first book in the Fargo series.

The story, published in 1969, opens with Fargo arriving in west Texas in 1916. He is described as tall and lean and wearing an army-style campaign hat over prematurely white hair. Others writing about Fargo say the description sounds a lot like the actor Lee Marvin in the 1966 movie, “The Professionals.”

Fargo is a hired gun with plenty of experience. In this tale, he is hired by the co-owner of a silver mine in northern Mexico who wants Fargo to accompany him down to the mine and to organize and protect a train of pack mules that will haul the silver out of a remote mountain valley and back to Texas. To do this, they will have to go through bandit territory and past the revolutionary army of Pancho Villa.

With his employer, Fargo has to get down to the mine in one piece, while fighting off gangs of violent bad guys. Once they get to the mine's location, they find their mission complicated by a renegade army blocking the mouth of the valley and waiting to strike and steal the silver.

Benteen (the pen name of author Ben Haas) keeps the many varied and at times hair-raising situations moving rapidly along. In a favorite section, Fargo and the mine owner avoid the renegades by entering the valley on a foot-wide trail high up on a rock wall. Not only do the men have to navigate this treacherous route, but also they must guide their horses along it.

Fargo is a fun, fast, short book and a welcome break from some of the heavier stuff I have been reading lately.

Among those who have written about Fargo is author and blogger Paul Bishop. James Reasoner wrote an introduction to a recent Kindle edition of Fargo.