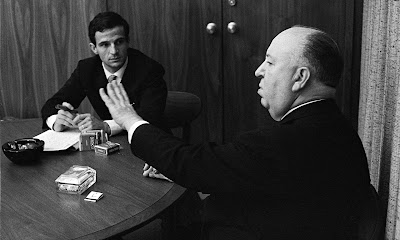 A few days ago, when considering a post about film director Alfred Hitchcock’s original and his remake of “The Man Who Knew Too Much,” I took an old book off my shelf to refresh my memory on a point or two. Once I started, I kept on reading. It is that kind of book.

The book is Hitchcock by Francois Truffaut, which was published in French in 1966 and in English in 1967.

Truffaut, a film director himself who burst onto the international scene in 1959 with his first film, “The 400 Blows,” was a leading light of the French New Wave. Before making movies, Truffaut critiqued films in the French press, including Cahiers du Cinéma, an influential film magazine founded by critic André Bazin.

Truffaut and his fellow New Wave filmmakers – Jean Luc Godard, Claude Chabrol, and others – were fans of American directors like Howard Hawks, Sam Fuller, and Hitchcock. They found that certain Hollywood filmmakers were able to put a personal stamp of the films they made for the studios and showed a consistency in the kinds of stories they chose to tell and the way in which they approached the material.

Some directors, like John Ford, were reluctant to discuss their techniques. But Alfred Hitchcock was not. In fact, Hitchcock was happy to tell interviewers just what he looked for in a story and how, precisely, he made his movies – sometimes going shot by shot to explain his methods.

Truffaut invited Hitchcock to sit down for a series of interviews in which the younger man went through each of the old master’s movies, from his first efforts in the silent era, to his break through films, like “The Man who Knew Too Much,” to the two best films he made in England (in my opinion), “The 39 Steps” from 1936, and “The Lady Vanishes” from 1938.

Another favorite star was James Stewart. Together they made four films: “Rope,” “Rear Window,” “The Man Who Knew Too Much,” and “Vertigo.”

He also loved working with Grace Kelly. In the book, Hitchcock told how he always had a thing for cool blonds. They made three films together: “Dial M for Murder,” “Rear Window,” and “To Catch a Thief.” The last of these was filmed on the Riviera. The following year, Kelly married Prince Rainier of Monaco and Hitchcock lost his favorite leading lady.

Truffaut’s book length interview with Hitchcock is a master class in film history and technique as the older director explained the language of film and how he used it.

Many have tried to use the master’s techniques, but no one yet as been able to beat Hitchcock at his own game.