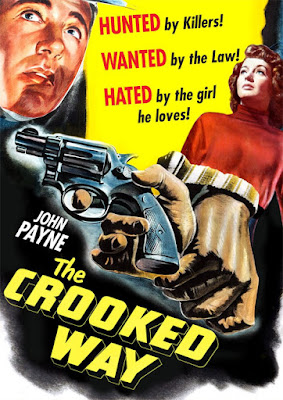 Amnesia stories require an enormous suspension of disbelief, at least for me, and yet they can be such great yarns.

Eddie, played by John Payne, is a returning World War 2 veteran with a brain injury that erased his memory. He believes he was originally from Los Angeles and so returns to that city to see if there isn’t something he might recognize that will help him recover. Shortly after arriving, he is harassed by cops who claim he is a gangster, a woman who tells him she is his wife, and some thugs who work him over for cheating them.

If the amnesia premise was not hard enough to overcome, why Eddie would not turn around and get back on the train – any train – and get out of there, is an even bigger mystery than the one proposed in the film. But then, if he did that, there would be no movie. So Eddie sticks around and takes a lot more punishment at the hands of gangster, Vince, played by Sonny Tufts.

Tufts has the usual beef with his former colleague in crime, but even more interesting here is the very strong suggestion that Vince is a drug addict. Drug addiction in movies was strictly forbidden by the Hollywood production code of the time. The filmmakers get around this with a quick explanation that Vince is taking meds for his nerves. They even show the audience his prescription bottle. And somehow they got it past the censors.

Director Robert Florey provides a fast pace and a lot of violence in this 90-minute movie. And not just movie violence, but people getting the living snot kicked out of them. This was a rare thing for movies of the 1940s, a little less rare in noir films. Still, in this production, the violence is intense. Perhaps the code enforcers paid less attention to modest little pictures than they did to the big studio productions.

Cameraman John Alton – the man who really puts the noir in film noir – keeps everything dark, intriguing and menacing. Even ordinary moments, like three gangsters going up a staircase, is so interesting in its angle and use of light and shadow that it exudes tension. Alton also had a technique in close ups of placing a speck of light in the lead actor’s eyes which somehow created a subtle star burst that gave the players’ faces a special life. He used this technique on leading lady Ellen Drew. He was also great at lighting the villain. Vince always looks crazed and dangerous.

There are a lot of clichés in “The Crooked Way”, and John Payne is not too convincing as a tough guy – not like Robert Mitchum or Robert Ryan could be – but the movie is worth watching, especially for fans of the genre.