“A United Kingdom” is a Movie to See 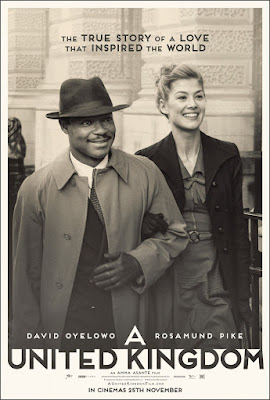 If “A United Kingdom” is still playing at a theater near you, go see it.

It is the true story of Seretse Khama, played by David Oyelowo, the heir to the hereditary kingdom of Bechuanaland (now Botswana, but in the late 1940s, still a British protectorate), who, while a law student in London in 1947, meets an English girl, played by Rosamund Pike, and marries her over the objections of his uncle, the acting king of his country, and the British government.

When I saw the coming attractions, I thought it was going to be good, but it was far better than I expected.

So check your local listings (OK, a Google search), find out if it is playing, and go see it.
Posted by Elgin Bleecker at 10:31 AM
Labels: A United Kingdom, Botswana, David Oyelowo, Rosamund Pike