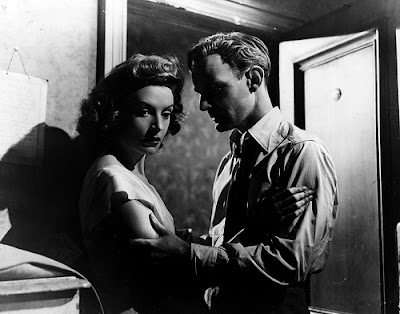 St. Patrick’s Day is approaching and, ironically, I happened to watch a film the other night with a distinctly anti-Irish tone. But then, most of the English characters in this movie did not come across too well, either.

“I See A Dark Stranger” is a 1946 war film set in Ireland and England in the weeks prior to the 1944 D-Day invasion. I was expecting a noir thriller, but was disappointed.

Bridie Quilty, played by Deborah Kerr, a young, obstinate and none-too-bright young Irish woman who spent her life listening to stories of fights for Irish freedom from the British, decides to serve her country against its ancient foe by becoming a Nazi spy in England.

While working diligently and unthinkingly for a nest of spies gathering information about the coming invasion, she attracts the amorous attention of a British officer, played by Trevor Howard. Why the Howard character would think Bridie anything but an ill-tempered idiot is beyond explaining. Bridie makes Maureen O’Hara’s Mary Kate Danaher of “The Quiet Man” look like an easy-going hippie girl.

“I See A Dark Stranger” is part adventure film, which the producers supposed would be in the mold of Hitchcock’s “The 39 Steps,” and part slapstick comedy with most of the slaps coming in the last 15 minutes of the picture. But this movie is a 100 percent mess, although a technically well-crafted mess.

The film was co-written and produced by the team of Sidney Gilliat and Frank Launder, with Launder directing. The two wrote the script for Hitchcock’s “The Lady Vanishes,” so this one should have been a lot better. But they did not have Hitch to guide them.

My advice is to skip “I See A Dark Stranger,” especially if you have any Celtic blood in your veins. You might want to skip it, too, if you are British because the movie is none too kind to your people either.

Now, so as not to leave you without a movie recommendation for March 17, do try to see John Ford's "The Rising of the Moon," Friday on Turner Classic Movies (in the U.S.). And, please check back here on St. Patrick's Day for a post on Ford's film.
Posted by Elgin Bleecker at 10:15 AM
Labels: Alfred Hitchcock, Deborah Kerr, Frank Launder, I See a Dark Stranger, John Ford, Sidney Gilliat, The Rising of the Moon, Trevor Howard