FFB: Six Days of the Condor by James Grady 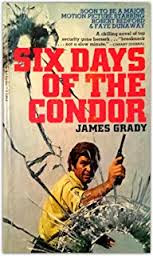 The violent spy thriller, Six Days of the Condor, is a fun, fast read from 1974.

Malcolm is part of a research division in which half a dozen men and women read novels all day and turn in detailed reports on them, noting any passages that may reveal a deeper knowledge of the world’s spy agencies than any ordinary person could know.

This division is off on its own, housed in a Washington, D.C. townhouse. Into this quaint building on a residential street come three men with machine guns who massacre everyone working there – except Malcolm, who left through a back door to run some errands for his boss and pick up lunches for the staff. Malcolm returns to find his colleagues dead. He calls headquarters and arranges to be picked up and taken to safety. But the pick-up is a trap which he narrowly escapes and which sets him running for his life, not trusting anyone.

Why the employees are killed is not too hard to figure out. The people behind it are well disguised. Malcolm's struggle to figure it all out takes a backseat to his avoiding the hitmen and staying alive.

In a strange twist, Malcolm kidnaps a young woman and hides in her apartment. He explains his crazy situation, she forgives him and jumps his bones. Well, 1974 was not that far removed from the free-loving 60s.

With a little suspension of disbelief, Grady’s novel is a swift, action-packed yarn with several well-done, tension-filled moments that keep the pages turning.

A couple of minor criticisms of the book are its use of two old devices. One is concealing the identity of the bad guys by using only vague physical descriptions in scenes featuring them. The other is leading the reader up to a revealing moment, and then cutting it short with a chapter break. The following chapter jumping ahead in time to the characters carrying out the plan which was not revealed to readers. These devices are still in use.

Overall, Grady did a fine job of setting up and sustaining suspense, and his lean prose style made for an enjoyable read.