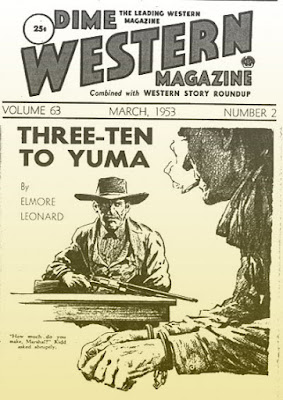 Recently, my friend, Prashant, who blogs at Chess, Comics, Crosswords, Books, Music, Cinema, posted a piece about the 2007 movie, “3:10 to Yuma.” The film is a remake of a 1957 movie with the same title. Both are based on a story by Elmore Leonard.

While I have read many of Leonard’s contemporary crime novels, I have read few of his Westerns. I went in search of a copy of this one and found it is not a novel. Elmore Leonard’s “Three-ten to Yuma,” is a fairly short, short story – about 17 pages, in the hard cover collection of Leonard’s Western stories called, The Tonto Woman.

The two movies beefed up the back-story and tacked on motivations that are not present in the short story. In Leonard’s version, first published in Dime Western Magazine in 1953, Paul Scallen is a deputy sheriff in Arizona tasked with getting outlaw Jim Kidd from Tucson to the Yuma Territorial Prison, near the border of California. To transport him the roughly 250 miles, Scallen will escort Kidd on a train leaving at 3:10 in the afternoon.

He and the prisoner arrive in Tucson just before dawn and wait in a hotel room until it is time to walk down to the railroad station. While waiting, word gets out that Kidd is in the hotel, and members of his gang arrive in town and wait for him and the lawman to come out into the open.

Although the date is not stated, the story takes place between 1876 and 1909. Those were the years the Yuma prison was in operation. It was closed when a new prison was built and is today a museum.